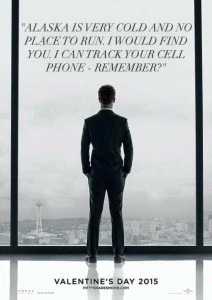 With the release of the screen adaptation of Fifty Shades of Grey, I’ve been thinking about our decision not to stock the trilogy despite its breath-taking sales back when The Husband and I owned The Edinburgh Bookshop and the various responses to our decision.

We didn’t like the book and following a lot of discussion we decided not to stock it. Besides, Tesco over the road were knocking it out for half-price and we probably wouldn’t sell more than a handful anyway so it was hardly going to have any impact on our bottom line. I can only recall one customer asking about it and that was more from idle curiosity than a desire to actually buy it. The first book in the trilogy became the biggest selling book ever in the UK and it’s easy to assume that declining to put it on the shelf must have been madness.

It wasn’t a book that would sell well for independent retailers though – it was tailor made for heavy discounting in supermarkets and anonymous purchasing online.  Independent booksellers I contacted while writing this said that sales were negligible – one said 17 copies in 2012 and none since; another said five. On a cover price of £7.99 we probably missed out on £30 or so of gross profit, always assuming that the customer interested in buying it didn’t buy something else instead. We weren’t daft – we understood our particular market and knew that we could afford to stick to our priniciples on this one.

Our objections, shared by all the team, one of whom bravely read all of the first book just to see how bad it really was (I just skimmed through but that was enough), fell into two categories.

Firstly, it was terrible. Really, really dreadful. This piece picks out some of the most excruciating passages  but for me the first on their list exemplifies the leaden prose: “His voice is warm and husky like dark melted chocolate fudge caramel… or something.” Or something? Go on, ELJ, you’re the writer – you tell us.  And has chocolate ever been ‘husky’? Sounds slightly mouldy to me and I’m pretty sure that wasn’t the intention.  And that was before we got to Anastasia’s dancing inner goddess. When we first opened the shop we said that we weren’t going to stock crap books. We might stock titles that we didn’t personally like or which we didn’t agree with but not actual drivel.  And it was generally agreed by all that 50 Shades definitely fell into that category.

Anastasia and Christian’s relationship is, without question, abusive. He isolates her from her family and friends; when having sex she asks him to stop and he doesn’t; he sets out all kinds of rules in their relationship from the frequency of her trips to the gym to what she eats; he stalks her… You get my drift. Is it because Christian is a billionaire that we’re supposed to see as desirable traits which wouldn’t be acceptable if he were a bin man or an accountant?

An abusive relationship isn’t necessarily violent as Polly Neate, Chief Exec of Women’s Aid explains in this piece.  Christian’s behaviour made us very uncomfortable. If Anastasia was our friend we’d be begging her to end this and to get a restraining order if he continued to stalk her.  Most women are all to aware where this sort of controlling behaviour can lead and it’s more likely to be a police station or an A&E department than a happy ever after.

Maybe we just thought too much about the negative aspects of this book and didn’t see them as just a bit of fun to read on the morning commute. Maybe you read it and thought it was just harmless entertainment. Maybe we had a romantic idea of book-selling. Maybe we needed to get off our high horse? Maybe.

But not selling drivel was a cornerstone for us and not promoting abusive relationships as aspirational was a principle we felt was important. To criticise it has laid us open to allegations of being intellectual snobs, overly romantic about the nature of bookselling, prudish and all sorts. But to embrace 50 Shades  as the very apogee of a fulfilling relationship? What does that make those people?

So much as the 50 Shades movie looks to be hysterically bad, I won’t be going to see it, not even in an ironic sense with my most feminist girlfriends. And I’m pleased that by not contributing to the economic weight of the franchise, whether in books, film or furry handcuff form, nor am I contributing to the normalisation of abuse.

*I should point out in case anyone goes in the bookshop and finds 50 Shades there, that we sold it a couple of years ago and that what the new owner stocks is of course completely up to her.

This entry was posted in Reading and tagged 50 Shades of Grey, bad writing, independent bookselling, principles. Bookmark the permalink.

One Response to 50 Shades and Me