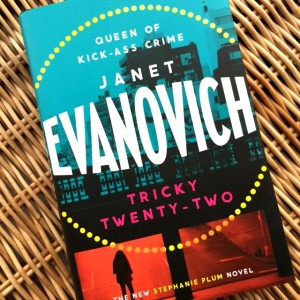 I’m not entirely sure that I believe in guilty pleasures but sometimes you want to substitute the literary equivalent of the wholemeal scone and vegetable soup for something a little less penitential. Something that doesn’t require deep consideration and is pure entertainment.

For me, that’s where Stephanie Plum, bounty hunter heroine of Janet Evanovich’s best known series comes in. Every autumn there’s a new adventure and the latest Tricky Twenty-Two was a lot of fun when it arrived last week. Some of the books have been better than others but that’s the case with any long series and the movie-version of One For The Money was a hot mess that only a true fan could love, at the same time as being a hot mess that maddened true fans. I enjoyed it but was so disappointed, not least because I imagine it killed the possibility of a series of films.

So that’s my guilty pleasure. Okay, that and Jilly Cooper. But to be honest, a good book is a good book whether high-brow or more commercial and I don’t feel especially guilty about any of my reading matter. What about you?

This entry was posted in Random... and tagged crime fiction, Janet Evanovich. Bookmark the permalink.