Jeremy Duns is a journalist and non-fiction author as well as writing a number of excellent spy novels described by William Boyd as “wholly engrossing and sophisticated”. He grew up in Britain, moved to Sweden in 2004 and now lives on the Aland Islands, a tiny Swedish-speaking, Finnish archipelago. I have never heard of the Aland Islands before but according to Google images they are beautiful. At least in the sunshine… I have ‘known’ Jeremy via Twitter for a long time and I was delighted that he was able to find time to be interviewed here.

I enjoy it – research and digging out new information when it’s non-fiction, and that and the experience of creating other worlds when it’s fiction. I want to explore my ideas about life through art, and books are the form I feel best suit me

I wrote a couple of short stories, but that’s about it. Then I became a journalist. I always wanted to write a novel, but didn’t knuckle down to it until I was in my late twenties.

I was offered a three-book deal from Simon & Schuster in 2008. I’d written my first novel, Free Agent, with the idea it would be the first of at least three books, but I hadn’t expected it to happen as fast as it did. It was a fairly standard publishing experience, though, I think: I sent the book to several agents, one took me on and then submitted it to publishers.

Q. How do you begin a new project? Do you plan in detail or just start writing and see where the story takes you?

I rarely just start writing as I usually want to see if my agent thinks there’s mileage in the idea first. That often involves a lot of preparatory work. For Dead Drop, my non-fiction book about Oleg Penkovsky, I had a detailed plan for the whole book, chapter by chapter, before I started writing it, but for my novels I usually just have a synopsis of a few pages. And some sort of idea of the tone and general drift. So for my most recent novel, Spy Out The Land, I knew I wanted it to be about Rhodesia and involve a threat to Paul Dark’s family. I dislike planning fiction too deeply, because the writing tends to lose spontaneity, but I like to have a reasonable idea of the thrust of the book, and a few real incidents I can spin the plot around. 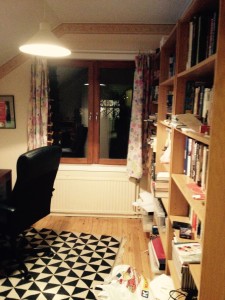 I can’t write with others around me, so it’s pretty much always at my desk. I occasionally use pen and paper, and will quite often tap out ideas or dictate into my phone. At the start of a book, I do a lot of research. That can take a few months, depending on how complicated it is: I spent around a year researching Free Agent, but a lot of it helped with subsequent books. Once I’m in the flow of a book, I try to hit a daily word-count, and that’s as close to a routine as I come. Near the end of a book, there’s usually no routine, and a lot of all-nighters.

Q. How polished is your first draft?

With word-processing I find it’s often hard to tell when one draft begins and another ends – once I’ve made a anything that feels like a significant change I re-save a file as a new ‘draft’, so I often have a lot. But at some point I have a completed draft that’s reasonably readable, but that has a lot of stuff in it that don’t quite work. That’s perhaps the first proper draft, and then I go through several more. I usually make a lot of changes after my agent has read it, and then again after my editor has come back with comments.

Oh, that’s a tough one. He’s dead, but probably Elleston Trevor, who under the name Adam Hall wrote a series of extraordinary spy thrillers featuring an agent known as Quiller. I’m not sure what I’d ask him if he were still with us – perhaps simply if he’d mind me buying him a drink

You ask very difficult questions! I don’t think there is one, really: every book is so much of a product of one person’s mind and personality that it doesn’t make sense to have written someone else’s.

I wonder if having a family counts as an achievement. Perhaps not, but I’ll go with that anyway.

Q. What talent or ability do you wish you had?

I wish I could play a musical instrument well.

Q. What is true happiness for you?

Time with my family; reading a great book; a long swim.

I wish there were more resources available for non-fiction – there’s a lot of bluffing and outright chicanery, unfortunately.

Write what you want to read.

Q. What are you working on at the moment?

I’m afraid that is classified information!

Thank you so much for finding the time for this.

Thanks for having me.