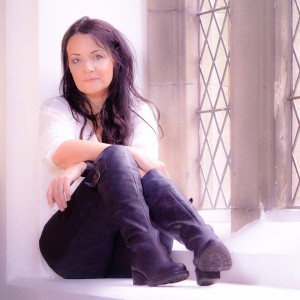 Joanna Cannon and I have been online friends for years now. I remember when she started blogging about her work as a doctor in a hospital psychiatric department – warm, insightful, clever and observant. I love the way she uses language and I was so pleased for her when her novel was snapped up and by the buzz it’s been generating ahead of publication on 28th January. The Trouble With Goats and Sheep is a genre-defying (part whodunnit, part coming-of-age, part observation on the nature of secrets) novel set in the legendarily hot summer of 1976. Mrs Creasy has gone missing and ten year olds Tilly and Grace turn amateur detectives, asking questions and finding out that Mrs Creasy knew a lot of secrets and that the residents of The Avenue are worried about what she might do with that knowledge. I loved it, especially the little details of the period – I was born in 1970s and well remember Angel Delight and Kay’s catalogue.

There’s been masses of wondeful pre-publication press coverage for Goats and Sheep and I think it’s going to be huge. Here’s The Guardian proclaiming Jo as one of their best new writers for 2016 and there are already many reviews out there, uniformly positive as far as I can see. I can’t wait to see how the wider public embrace it after publication – it’s going to be very special to a lot of people. I was particularly pleased Joanna found time in the all the publicity chaos to be interviewed here. 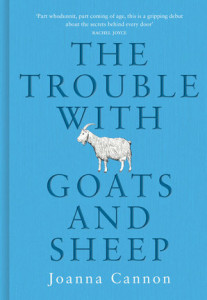 I think I write (and read), because it helps me to make sense of the world. It’s a great way of understanding something from another perspective and experiencing a new environment, without ever having to leave your armchair. As an adult, the first time I wrote with any seriousness, was when I first became a doctor. The medical wards can be quite distressing at times, and I found it really helped if I wrote about how I was feeling. It’s amazing how things begin to make sense if you write them down.

I always wrote as a child, purely for my own entertainment. Poems, short stories, diaries … I could amuse myself quite easily, as long as I had a pen and paper (this is still true). When I was eleven, my English teacher gave us a term-long assignment of writing a novella. Mine was about a girl who murdered all her teachers. I’m sure the school weren’t worried about me in the slightest … I didn’t write with any great seriousness, until I started my blog (around 2010). They were just little snippets of life as a junior doctor, but people were so kind and supportive, and in 2013, I decided to start writing a novel. This eventually became Goats and Sheep.

In January of 2013, I made the decision to leave the safe corridor of never showing my writing to anyone, and have a year of being more adventurous. Part of that adventure was going to York Festival of Writing, and entering their Friday Night Live competition (a kind of literary X-Factor, where a chosen few read out 500 words of their WIP to a room full of very important publishing people). I was lucky enough to win, and through that, I met my agent, Sue Armstrong at Conville & Walsh. Sue sold Goats and Sheep to The Borough Press (HarperCollins), when it was a partial MS (around 40K words), and I spent large amounts of time staring into space and wondering if it was all real.

I generally know the start point and the end point, and a few stops in between. I have to know where I’m going with a story, and what I’m trying to achieve, before I start writing, but I don’t plan all the details in advance. A lot of Goats and Sheep happened organically, but I knew from the very beginning exactly how it would end. This is quite opposite to the rest of my life (which consists of many lists) – with Goats and Sheep, I just had a few points written on the back of an envelope. I suppose if my writing was a car journey, I’d know I was heading for Glasgow, and I’d know where I was going to call for petrol, but I wouldn’t really have the first clue how I was going to get there. 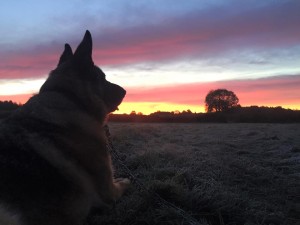 Tragically, I need complete silence (which can be very limiting away from home!), because I’m so easily distracted. I write straight on to my laptop, and I’m always much more productive in a morning (before my head is filled with the rest of the day). I think my writing habits stem from being on the wards – the only time I had for my novel, was before I went to work (and the occasional lunch break in my car), so I generally get up around 3am, walk my dog through the fields and start writing. It’s a hard habit to break! I don’t have an office, or a particular place I like to write. As long as it’s comfortable and I have plenty of tea, I’m set to go.

To within an inch of its life. I find it impossible to move on until I’m completely happy with what I’ve already written, so I will go over it (and over it and over it), before I write the next page. I’ll quite happily agonise over a comma for forty-five minutes, so by the time I get to the end of my ‘first draft’, it’s more of a fifty-first draft. I did once try to write NaNo style and just plough on, but whilst it works brilliantly for some people, it just made me angsty and unsettled!

This is very tough, because there are so many! I think I’m going to say Alan Bennett, because he has been such a huge influence throughout my life. I remember watching Talking Heads as a child, and realising the power of words for the very first time. I knew exactly who these people were, within the first few lines – and it felt as though someone had opened a door in my mind. I’m not sure I’d ask him anything specific, I think I’d much rather have just an ordinary chat – he is, after all, the expert in turning the ordinary into something rather extra-ordinary.

Again, a tough one! I think I’d love to have written The Shock of the Fall, by Nathan Filer. As well as being the most beautifully written story, Nathan won an award for changing attitudes towards mental health. I can’t imagine anything more wonderful. The very best stories are ones where you start to think differently about something between the first page and the last, and to help people understand more about mental health issues is just such an incredible achievement.

It would have to be when I graduated medical school and became a doctor. I left school at fifteen, with one O-level, and went back many years later, when I finally began to appreciate the importance of education! It was very tough (aside from all the studying, I had a five-hour round trip to get to Leicester every day and I was working weekends delivering pizzas – mainly to pay for my text books!), so to get through it and qualify will always be something I’m very proud of. I think also, I made a much better doctor than I would have at twenty-three (personally speaking, that is – there are some amazing young doctors out there), so everything happens for a reason. It really doesn’t matter if you don’t do things in the same order as everyone else!

Q: Where is your happy place?

Definitely walking my dog through the fields each morning. It’s a (very) early alarm clock, but it’s worth it to have the world to ourselves for a while. We usually walk around six miles each day, with just pheasants and squirrels for company. It’s a great place to think out plot riddles and plan stories, and it’s the only time I feel truly at peace. We do the same walk each day, and I love seeing the seasons change. The circular nature of the countryside is strangely reassuring.

I would love there to be a little less snobbery about reading choices. I’m always very disheartened when I see ‘what is your reading guilty pleasure’ type questions. They’re usually focused on romantic fiction, and I find that incredibly short sighted. Firstly, it takes a huge amount of skill to write successful romantic fiction (especially when readers have so much choice), and secondly, reading should never make someone feel guilty. Love is (hopefully) a fairly integral part of everyone’s lives, so for people to look down on books about relationships is really quite bewildering!

Read. Read. Read. Always and everything. Every genre has something to offer – crime fiction has incredible plotting, romantic fiction has great dialogue, historical fiction is perfect for understanding detail and setting. There is nothing more inspirational than beautiful prose, so if you ever get stuck or disheartened, just read a great book. As well as lifting your spirit, it will lift your writing.

I’m currently working on Book Two, which is all about what it means to grow old …

Thanks so much for finding time for this Jo and all the best for publication day!