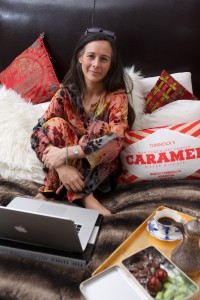 Sara Sheridan is one of my favourite writer-buddies to spend time with. A ball of energy, she never fails to gee me along and make me feel more positive about absolutely anything, simply by force of her own personality and attitude to life and writing. She’s also hugely productive in a multitude of areas. As well as writing the successful Mirabelle Bevan series, she’s a patron of Scottish charity It’s Good To Give; a member of the writers’ collective 26; she blogs for The Huffington Post; campaigns on political issues; writes screenplays and children’s books; has a busy events schedule, and makes a cracking cup of tea. Recently, she’s found time to come up with the idea for a Scottish gift retail business called Hunt & Gather which will launch in 2016.

As I mentioned, her current writing is centred on the not-completely-cosy Mirabelle Bevan series of crime novels set (mostly) in 1950s Brighton. The fourth of these, British Bulldog, has just come out in hardback and the recent big news is that the rights to the series have been bought by Constable & Robinson (now part of the Little, Brown group), who will be publishing future titles in the series – Operation Goodwood – as well as reissuing the existing four books in their own imprint.  The first of the Mirabelle Bevan books will be published in the USA next spring.

Here’s her interview – pop back on Friday when I’ll be giving away a bundle of all four of the Mirabelle Bevan books including the newest, British Bulldog.

Why do you write?
It’s my job and I love it. You know that feeling you have when you’re reading a good book – the one where the rest of the world disappears? Writing does that times ten. I’m a story junkie.

Were you a childhood scribbler or was writing something you came to later in life?
I wrote a little when I was at school but mostly I was a reader (still am). I didn’t write my first novel until I was about 27.

How did you get your big break?
I’m not sure what was my big break! Now and again I’ve been jammy – getting my first novel accepted about three weeks after I sent it off: that was a good start. But there have been lots of things since. I’ve been incredibly lucky to be able to work in different genres, for example.

What’s your writing routine? Bustling cafe or silent solitude? Crack of dawn or midnight oil? Laptop or pen and paper?
Almost always a laptop. It’s faster. But I’ll write anywhere . My favourite, though, is first thing in the morning and in bed.

What writer do you most admire and what would you like to ask them?
Gosh – T C Boyle, I suppose. Or William Goldman. Or Jeremy Leven. I’ve met two of these three and was incapable of asking anything. I turned into a proper weirdo. I just stared.

What book would you most like to have written?
Water Music by T C Boyle. It’s my all time favourite. I have a pang of jealousy every time I read it.

What book do you recommend to people most frequently?
Apart from Water Music it’s Star of the Sea by Joseph O’Connor.

Aside from writing, what skill or achievement are you most proud of?
I’m a good listener. That’s taken a long time to develop. If you listen carefully, it illuminates your understanding. People tell you everything

Where is your happy place?  I have lots. Mostly they involve being with my friends and family and almost all of them involve good food. It’s not so much the place, really as the company and the yummies.

If you weren’t a writer what would you do?
I do other things as well already . . . right now I’m setting up an online shop called Hunt & Gather. We’ll be selling really great Scottish gifts – no tartan tat allowed!

What aspect of the publishing industry would you like to change?
I hope this is going to change. In the UK, in particular, corporate publishers treat writers appallingly. Terribly. Worse – women averagely have a worse time of it than men. The Authors Licencing and Collecting Society is feeding into a parliamentary committee that is dedicated to changing this. It’s chaired by Scottish MP, Pete Wishart. I’ve written about my outrage – google me on the Huffington Post. It’ll take your breath away.

What piece of advice would you give to aspiring writers?
Go easy on yourself. Learn to edit. And honestly, you need a big dollop of luck if you’re going to make it, so chill, cos it isn’t always all about you.

That sounds sage advice – it’s really easy to take rejection personally. Thanks for finding the time for this and we’ll be back later in the week to give away those Mirabelle Bevan books.