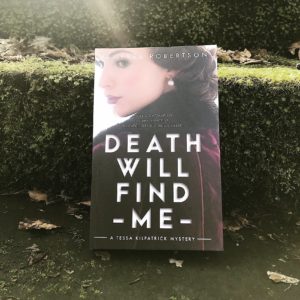 I have been shockingly bad at updating this year. There’s no excuse, just a whole load of tiny justifications ranging from feeling overwhelmed by the pressure of starting out as an indie author, to getting my head down to write more, to personal stuff relating to home and family. All excuses, none of them really enough to warrant going so quiet that kind people took to emailing me to ask if everything was ok!

It’s been quite a year and although I knew what indie publishing entailed, the actuality of being the only person responsible for every aspect from writing to marketing is exhausting. The idea of it, never mind trying to do it all. Consequently, I’ve treated Death Will Find Me as a bit of an experiment. I’ve tried some different marketing approaches including wrestling with ads on Facebook and that was successful although I’m very aware that to be worth the investment of time and money, I need to have more books for readers to discover once they’ve read the first one.

Tessa Kilpatrick is quite a character and I like spending time with her, but I decided early this year to take a break – probably not ideal from a business point of view – and write the second early next year. My diary reminder for Monday 13th January 2020 says “Begin Tessa Kilpatrick Book 2”. I have some ideas…

In the meantime, I’ve been working on a new series about Kate Carpenter, an art crime investigator. The first is almost finished and I’m currently working on the final draft of the second. I’ve also written a novella, Vanishing Point, introducing Kate which will be available in a week or so as a free download to those on my mailing list. It’s taken time, not least because I wanted to get proper developmental editorial input on the series, but the books are far better than that and I’m looking forward to hearing what readers think in due course. They’re hard to describe although I’ll have to find a way. Not simply a heist thriller, though.

For now though, I’m off to wrestle with the formatting for Vanishing Point so that it’s ready to release next week.  In the meantime, if you’ve read Death Will Find Me, thank you very much. Do leave a review if you have time as it makes such a difference to writers and helps other readers to find books that they’ll enjoy.

This entry was posted in Writing and tagged update. Bookmark the permalink.