Home Exchanging – I’ll swap you mine if you swap yours 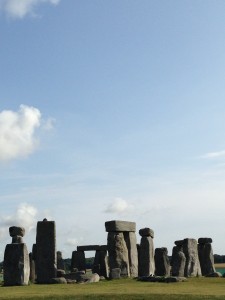 Stonehenge – one of the highlights of our first home exchange trip

After deciding that we would try home exchanging and choosing a company to register with (here’s my blog post about that), it was time to put our own listing together and start arranging our swaps.

There is masses of information on the Homelink website and by studying other people’s listings we worked out what information we needed to give and what we should bear in mind in terms of photos.

In terms of description, it’s important to be clear about the limitations of your home.  For example, our bathroom, tucked up in the eaves of the house, doesn’t have a shower because the sloping ceiling restricts the head height. There is a lovely claw-footed bath however and it’s rather boutique hotel-ish so we made sure that our photograph showed both its limitations and how nice it is. We made sure that our compact but well-equipped kitchen looked its best, tidied the bookshelves and ironed the bedlinen.  We added some images of the neighbourhood as well – the farmers’ market that sets up round the corner every weekend, our fantastic local French deli etc.  Top tip: make the beds and put the loo seat down before you take your photos – you would be amazed how many people don’t and frankly, if it doesn’t look like you take care of your own home will people want you staying in their place?  I wouldn’t.

We also worked out our availability and the places we’d like to visit.  As we’re self-employed we’re able to be quite flexible about dates – our only real restriction is The Son’s school terms so we put those down but specified the durations we were interested in. For example, although in the summer we’re available from the end of June to the end of August, we only want to be away for up to three weeks of that.  In terms of destinations, we put down a range of places – UK and Europe for half terms and the USA and other more far-flung destinations in the summer.  We also – and this is important – put that we were open to offers from home exchangers in other locations, even if our dates were fairly fixed.  This leaves open the possibility of marvellous serendipitous trips to places you’d never even thought of.

Talking to other people, it seems that being very specific in terms of dates and destinations can be rather limiting. You do see the odd listing where people say they’re looking for a swap to a particular small town on a very precise date and I do wonder how they’re going to get on.  Finding another person who wants to go to, for example, Lichfield in the third week of May could be quite a challenge.

Then it was time to start approaching other exchangers….

There is an option on the Homelink site to add possibles to a personal file.  That this file doesn’t keep a track of offers sent and responses is one of the clunkier aspects of the site.  It would be good to easily see whether you’ve contacted someone and what their response was.  Hopefully, the much talked about website redesign will address this.  There is a box where you can add notes which is helpful.

I started by contacting a handful of people in different locations – we’d like to go to the Midlands for a week over Christmas or New Year so that we can see something of my family; Madrid was a possible for half-term or Easter as The Son is doing Spanish GCSE and for next summer we decided to save our pennies and go for a big trip to the USA as we’d love to go to San Francisco.  Although our listing stressed the joys of Edinburgh, I made sure that in our email we mentioned that it’s a year round destination with all the galleries, restaurants, shops etc that you’d look for in a capital city but that it’s small enough to walk across.  For the people that we were interested in swapping with in the summer we outlined the various festivals that are on and what a cultural cornucopia it is.

Responses to our offers were mixed as you’d expect. Some people said that they had been to Edinburgh and wanted to visit other places before they returned which is fair enough; some had organised their exchanges and not updated their listing on the Homelink website which was mildly irritating and some people didn’t want to travel in the weeks we were suggesting.  Top tip: if you don’t want to travel over Christmas or New Year, don’t include that period in listing as a time when you’re available or looking to travel.  We did have one person say that they’d be interested but needed to know the square footage of our home – when they didn’t reply to that information I felt rather snubbed!

Non-response can also be a problem – everyone’s listing shows what their response rate is and it’s disappointing to see that some are as low as 50% or even less.  One of the things that I think Homelink could consider is setting some rules for members about responding especially as there’s a button in everyone’s message box to send a quick ‘thanks but no thanks’ reply.  We’ve found that people in London, Madrid and Venice are among the least reliable at replying.

Most people – the vast majority – were lovely, even those who turned us down.  I had conversations with people about their experiences and their travel plans, got tips from experienced exchangers and came up with masses more ideas for where we’d like to go – I have a hankering to stay on an island in the Stockholm archipelago and a houseboat in Seattle (a la Sleepless in Seattle) would be fun.

The offers we received were really interesting.  The vast majority came from France – home exchanging seems to be very popular in Provence for some reason – but we also had offers of homes in the Marjorcan countryside, Milan, Ibiza, Toronto, Chicago, Berlin, Australia and Dubai.  We wanted our first exchange to be in the UK and were delighted to set up a swap with a family in Dorset.  I’ll write more about that in my next post but suffice it to say that we had a blissful two weeks pottering around the southwest, reading in their peaceful garden and spending some really great family time just relaxing.  We also have swaps organised for London, Venice and San Francisco – all we need now is to organise a short break in New York en route to California next summer….

In my next blog post I’ll write about the practicalities of actually exchanging rather than day dreaming about far-flung places and the nitty-gritty of making it work. I’m also planning another post with helpful tips from ourselves and other, more experienced, home exchange.  You can read my first post on the subject here.  Think about trying it though – a whole new world of travel has opened up for us!

What do you think?  Is home swapping something you could imagine doing?