January’s writing – not just about words on the page 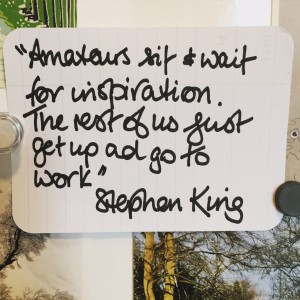 I began 2016 feeling pretty positive about my writing and where the novel’s going and I’ve got a fair amount written this month, if not quite the 20k I planned here. But there have been a few writing-based happenings this month that have kept my feeling of positivity pretty high.

After Pitch Perfect I was invited to join a writers’ critique group by the lovely Shelley Day whose first novel The Confession of Stella Moon is out later this year. It’s taken me a few months to work up to it, mostly due to nerves and a chonic case of imposter syndrome but I am so glad I went along. The other women in the group were really friendly and supportive and said lots of nice things about the submission I’d sent it to critique although – crucially – they all had suggestions to make and questions that made me think a little harder about aspects of The Novel. The group is organised by Angela Jackson and I’m really looking forward to our next meeting.

The other exciting news was that following a brief conversation on Twitter (mostly by DM) an agent I really rate asked to see the first chunk of The Novel. He got back to me the next day (unheard of!) with a couple of suggestions as to how the text could be tightened up and has asked to see the rest of the manuscript when it’s completed. Considering that the work he saw wasn’t an absolutely final draft I took a lot of heart from that and am bashing away with renewed vigour. I also seem to have given myself a scary deadline because I told him that it would be finished by Easter. Then a friend pointed out that Easter is early this year…  Consequently, I’m going to be typing as fast as I can so that I at least have a complete version by then, even if I do need another month or two to polish it up. But that’s positive isn’t it? If it was drivel presumably he wouldn’t have asked for the full ms.

I’m still struggling to establish a routine to my writing and that’s something I need to keep working on. I have a note above my desk which is a quote from Stephen King (isn’t it always?). He says: “Amateurs sit and wait for inspiration. The rest of us just get up and go to work.”  I need to get myself into that mindset.

So – goals for February

This entry was posted in My Writing and tagged critique group, literary agents, Stephen King, writing. Bookmark the permalink.