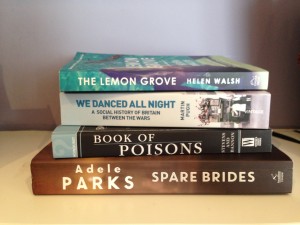 I read prodigiously – both from a lifelong love of books but also because running the Glenogle and Bell Book Company means that I need to keep up to date with new titles so that I can send our customers books that they will love.  I want to review more of the titles I read here – not least because publishers send me so many of them and it seems only polite to mention them, even if I can’t always be positive.  Now that I’m attempting to blog more regularly I’ll try hard to include as many books as possible.

I don’t recall reading any of Adele Parks‘ earlier books although I’m sure I have but Spare Brides grabbed me from the start.  I love anything about World War One, probably stemming from having been an avid reader and and re-reader of KM Peyton‘s Flambards series over the years and I have a particular interest in the experiences of women in the post-war period.  In the main I loved Adele’s characters and the way that she explored the diversity of women’s experiences from those who decided to build careers – formerly unheard of – to those whose who were caring for husbands who’d come back terribly maimed both mentally and physically. The main character though, Lydia, Lady Chatfield and later the Countess of Clarendon, was not terribly sympathetic (in my opinion, others may empathise more), finding that the life she’d wanted before the war was restricting and unfulfilling afterwards, in direct contrast to her rich and beautiful friend Ava who embraced the changes brought by war and saw life could offer so much more than breeding and arranging flowers. Highly recommended.  There’s also a gorgeous Pinterest board set up by Headline with some images relating to the 1920s.

There is masses of fiction being published at the moment dealing with World War One and its aftermath. I wanted to know more about the reality of the period and picked up We Danced All Night, A Social History of Britain Between the Wars by Martin Pugh, an historian who manages to convey serious research in a highly readable way.  British life changed enormously in that 20 year period with huge improvements in living standards, diet and health as well as more mundane things such as the notion of paid holidays and the football pools.  Divided into distinct but overlapping sections detailing specific areas of interest from the decline of the aristocracy, the rise in property ownership, diet and health and the growth in popularity of motoring, the book is fascinating.  I see that he’s also written a history of the Pankhurst family and I must get a copy of that.

Another title I’ve been dipping into recently is Serita Stevens and Anne Bannon’s Poisons; A Writer’s Guide.  Utterly fascinating, both in terms of the poisons themselves and the way that they’ve been used by writers over time, particularly in the Golden Age crime novel where so many hapless victims met their end by means of cyanide, arsenic and strychnine.  There’s a very helpful chapter on the workings of a criminal toxicologist (spoiler alert: CSI isn’t wildly accurate!) and advice on how authors can invent a convincing poison.  A Christmas gift from my husband, I can heartily recommend this whether you want to know the dosage of arsenic needed to poison one’s mother-in-law (not mine, she’s lovely) or are curious as to the accuracy of some of literature’s more dramatic demises.

The Lemon Grove by Helen Walsh is a book that I’d seen a lot of people raving about this on Twitter etc and it seems to have made it to every list of recommended summer reading.  The jacket and endpapers were adorned with literally dozens of gushing quotes – actually quite off-putting – and the Mrs Robinson-esque story of a middle-aged woman’s obsession with her daughter’s boyfriend was intriguing, promising all the sexiness and tension of the perfect beach read wrapped up in something far more literary and sophisticated. I hated it I’m afraid. I found Jenn, the main character, to be shallow and silly and her lusting over the lecherously described 17 year old boy was really quite distasteful.  Given that the author’s descriptions of the area and the enonymous lemon grove were so atmospheric, the sex scenes when Jenn finally got her hands on the poor boy were jarring in their crudeness.