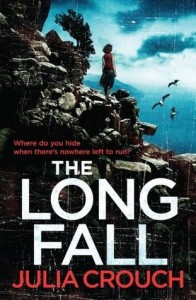 The Long Fall by Julia Crouch

The Long Fall is the fourth novel by Julia Crouch and I must read more.  I have a feeling that there’s a copy of Cuckoo kicking around somewhere… *waves hand vaguely in direction of double-stacked and disorganised wall of books in the sitting room*. Also, Julia can be found on Twitter as @thatjuliacrouch – do follow her; she’s great fun.

Emma, fresh from her A levels and her dull hometown is backpacking around Europe in 1980.  It isn’t as much fun as she anticipated though and she’s pleased when she chums up with a couple of American travellers a few years older than herself.  She’s a little disconcerted by their behaviour – Beattie’s casual attitude to theft and Jake’s short temper – but they continue on, leaving Athens for the paradise island of Ikaria. There, a devastating incident happens which changes Emma’s life forever and means that she can never go back to her old life.  In 2013, Kate, banker’s trophy wife turned philanthropist has a superficially perfect life, somewhat belied by her OCD and eating disorder.  When these worlds are brought together by an unexpected and unwanted visitor, it emerges that someone has been waiting three decades to exact revenge.

I really enjoyed this – perfect holiday reading, although I have to confess that some of Kate’s actions were irritating as she walked blindly into every trap set for her.  The tension rachets up nicely as the novel approaches its climax which is both inevitable and a little unexpected.  I was left feeling that I’d had to suspend disbelief a little too much at times but given that my did-not-finish pile is much bigger than the got-to-the-end-of pile, it’s a tribute to the author’s narrative skills that I didn’t abandon the book!

If you like Sophie Hannah and Erin Kelly’s books you’ll like this.  The Long Fall is out on 11.9.14 in paperback.

One Response to Shelf Notes: The Long Fall by Julia Crouch*