Rembrandt – The Later Works, at the National Gallery, London 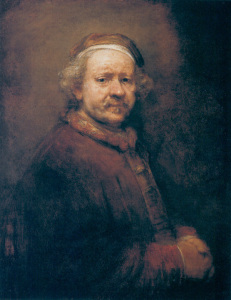 Rembrandt, self-portrait at the age of 63

Once again I’ve been rather slack.  We’ve been away on another home exchange – this time to London – and I’ll blog soon about that, but it’s also been half-term, we’ve bought another house, work’s been busy etc…. I have a million excuses.

While in London, we planned to visit as many museums and galleries as possible and a highlight was the Rembrandt exhibition at the National Gallery, on until mid-January.  It is the winter’s blockbuster show and it’s been impossible to ignore the hoo-ha in the media about it.  The Simon Schama documentary on the BBC was excellent.  We booked our tickets in advance, assuming that this would enable us to look around it in relative peace and if I had a criticism it would be that the sheer number of people there made it nigh on impossible to look at the paintings properly.  One shuffled from drawing to etching to painting, elbowed regularly by other people and shoved by people with headphones and audio guides (something about headphones that makes the wearer oblivious to others) and although I’ve seen some of his amazing later works, I remember few.  Certainly there was little opportunity to stand and simply absorb the great man’s genius.

However, just as we reached the end, The Husband noticed that the first room was almost empty, the crowd having shuffled on, and we nipped back in.  That first room, hung with a small etching and four self-portraits showing Rembrandt in defiant middle-age, his rueful older years and his last portrait, painted not long before he died at the age of 63, was worth the ticket price alone.  They’ve been cleverly hung and if you stand in the centre of the room and look around, all four portraits are looking directly at you, confronting you with his humanity, his complex life-history. As Jonathan Jones says in this piece from The Guardian in 2004, it’s like meeting him and ‘you have no idea what to say to him, and fear what he is about to say to you.’

It’s rare that I’m moved by a painting, but this portrait brought tears to my eyes, such is the feeling of sadness in the subject’s eyes. It is as though despite his pride in his genius, there is terrible pain. You feel – I felt at least – that he would have traded that talent and all the highs and lows of his spectacular career if it meant that he wouldn’t outlive his wife and children, the last of whom, Titus, passed away that same year.  It’s a portrait of dignity, pain, long-suffering, heartache and I could have looked at that painting and its immediate companions for hours. I’ll go back when it’s rehung in the main collection so that I can do just that.  If you get the chance to see the exhibition do go and I hope it’s quieter when you do.

I came home with a postcard of that painting to put on the wall near my desk, to remind me of its humanity, although a postcard can’t hope to convey the subtleties and richness of the real thing. The National Gallery shop has an extensive range of Rembrandt merchandise if a postcard can’t tempt you – you can remind yourself of this stunning painting with a fridge magnet or a cushion or an Iphone case. The banality of that almost made me weep too.

This entry was posted in Places to go and tagged art, London, National Gallery, Rembrandt. Bookmark the permalink.