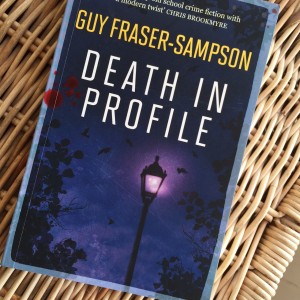 The serial killer whose crimes are the focus of Death in Profile is not operating in the frozen wastes of Scandinavia or the the inner city backstreets. Rather, in the manner of the Golden Age crime novels that inspired Guy Fraser-Sampson‘s first detective novel, this killer stalks the altogether more rareified neighbourhood of Hampstead, London. A reshuffle of the police officers investigating the death leads to the involvement of a criminal profile and -unexpectedly – that of a particular Golden Age detective.

Death in Profile is the first in a planned series and introduces the characters nicely. It’s traditional but with an inventive and eccentric element and I’m looking forward to future titles in the series. Christopher Brookmyre describes it on the front cover as “comfortingly old school crime fiction with a modern twist” and that sums it up perfectly.

Next week – Guy Fraser-Sampson will be here talking about how he writes, his big break and giving his advice to new writers.