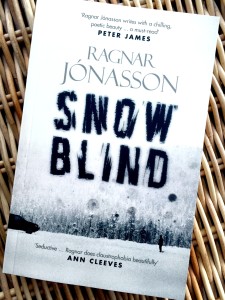 Orenda Books is a tiny publisher specialising in commercial but still literary, mainly crime, fiction and with a strong Scandinavian bias. Karen Sullivan, its MD, is an absolute tornado of enthusiasm and Snowblind by Ragnar Jonasson is one of the handful of books she thrust into my hands at Bloody Scotland.

Set in Iceland, the story takes place in a small remote fishing village. It’s the sort of place where no-one locks their door and where everyone knows everyone else and it’s accessible only via a small mountain tunnel. The tunnel is blocked by an avalanche and the 24 hour darkness is beginning and Ari, a young policeman newly stationed in Siglufjorour, has to deal with two incidents and a growing sense of isolation. He soon realises that just because everyone knows each other, that doesn’t mean that it’s a happy community – quite the opposite in fact with many secrets lurking just beneath the surface. There’s a killer on the loose and Ari has no-one to help him.

The book is expertly plotted with a well-drawn cast of characters. It’s strong on atmosphere with the claustrophobic nature of life in this small community cut off from the rest of the world and full of snow and darkness captured beautifully. Although so modern in many ways, that isolated nature of the setting also echoes a more traditional style of crime fiction. Hugely satisfying and the first in a series so more to look forward to. Go buy or borrow it!