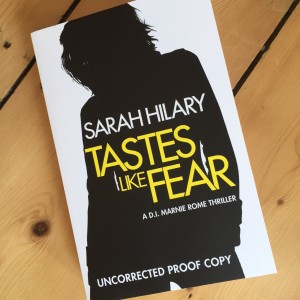 This is the third in Sarah Hilary‘s DI Marnie Rose books and a series which was new to me – I must get hold of the first two at some point. I loved Marnie – caring, smart and formidable, exactly the type of cop you hope turns up if anything bad happens in your own life. Her Detective Sergeant, Noah Jake, is also interesting without being a tick-list of potential plotlines like so many sidekicks.

From the beginning, where a teenage runaway is befriended by a man who the reader knows at a visceral level is too good to be trusted, Sarah Hilary imbues the plot with a sense of fear, only increased as we realise just how malevolent this man, nick-named Harm, actually is. As the parent of a teenager it’s particularly chilling, especially when some of these girls start turning up dead.

I liked the depth of the backstory – Marnie’s foster brother who murdered her parents but still haunts her from prison and Noah’s own brother, troubled and on the fringes of gang culture. It will be interesting to see how those relationships develop in future books.

This is a great piece of crime writing – I’ll be happy if The Novel turns out a fraction as well. It’s hard-hitting without being puriently violent, has superbly drawn characters, a powerful use of language and a tight plot. Highly recommended.

Tastes Like Fear is published in hardback on April 7th and I’ll be interviewing Sarah here next week.