The books we give to others. 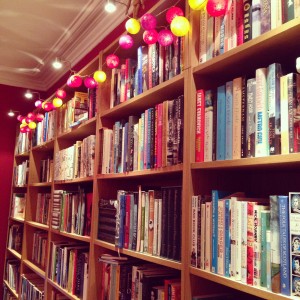 An article in The Telegraph last week asked what are the books we find ourselves giving as gifts again and again and again.  It set me thinking; I give books as gifts frequently although it sometimes strikes me that some people are less than enthusiastic about receiving them. Maybe they think that it’s lazy because we work in the book trade and that I should put more effort into my present-buying, tramping the streets in the December rain and snow like everyone else?  Many of my friends and family love to receive books though and I have a two year niece who is particularly enthusiastic about books and it’s a joy to choose titles for her.

Thinking about it though, I realised that there are a few books that I give to people again and again. Not necessarily because they’re great literature but because they’re fun or comforting or beautifully written.

One is Hens Dancing by Raffaella Barker – I bought this in hardback in Borders on Oxford Street when I was pregnant just before I got on the train back to Edinburgh and had a lovely time curled up with it while we rattled through England and the Scottish borders. It’s the story of newly divorced Venetia, living in the Norfolk countryside with her three children and it’s warm and funny and elegantly written.  I re-read it surprisingly often – it’s the literary equivalent of a glass of chilled Sauvignon in the garden. To be honest, it’s perfect for reading in the garden with a glass of something cold and cheerful.  The hardback edition was gorgeous and until recently I would try to get hold of that to give to people but they’re getting harder to find though. I should probably try and stockpile a few.  Raffaella’s newest book – From A Distance – is great too.

For a long time my default book gift for teenage girls was Dodie Smith’s I Capture The Castle. It’s perfect from the opening line of ‘I write this sitting in the kitchen sink…’ and it has everything from eccentric family members, to a crumbling castle to falling in love for the first time. Really, it’s exquisite and if you haven’t read it you should.  The more recent addition to my book gift repertoire is How To Be A Woman by Caitlin Moran which is a great way to introduce girls to feminism – what it is and why it still matters.  It’s a polemic that romps through such issues as Brazilian waxing, abortion, the pay-gap and why we’ll know that women have actual power when Rhianna gets to wear a cardigan in her videos. It’s frank and funny and a regular gift for 16 year old girls to get them thinking about the place they want to occupy in the world.

Finally, my other frequently given book is The Diary of a Provincial Lady by E M Delafield.  I own this in about four different editions and my favourite is the battered old green-spined Virago which contains all four of the Provincial Lady. Now though Persephone have published in their gorgeous dove-grey standard format and I snatched one up last time I was in their shop in Bloomsbury. So many people will be receiving this from now on although there are so many Persephone titles I like to give – Miss Buncle’s Book by D E Stevenson for one.

What books are your standbys for gifts?

2 Responses to The books we give to others.