What non-writers don’t know about literary agents. Or, it’s not like the Yellow Pages 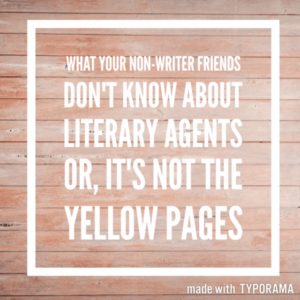 As you know, I was recently taken on by a literary agent (still excited about that) and I’m getting down to writing my next book. More on that process later – trust me, it’s quite a change of mind-set.

On telling people your exciting news, your writing friends are really chuffed for you (with exceptions that tell you a lot about them) because they know that it’s a really big deal. A Really Big Deal. They know the numbers, they know that some publishers won’t consider work that doesn’t come via an agent, and they know just how hard you’ve worked to get that far, even though it is only the first step on the ladder to publication and guarantees nothing.

But, and I didn’t realise this beforehand, some people won’t get why you’re so over-joyed. They’re happy for you because they care about you and they’re pleased that you’re pleased. Why you’re quite so excited is a bit of a mystery though.

I only grasped this when I was talking to my lovely and hugely supportive father-in-law who asked me why this agent business seemed to matter so much to me. A little questioning revealed that he thought that it was a bit like taking on, say, an estate agent. You look in the Yellow Pages or the online equivalent, pick out someone you like the look of and who has competitive commission rates, and there you go.

When I explained that my agent, and this is far from unusual, gets a few hundred submissions from prospective clients EACH MONTH and takes on a handful EACH YEAR, his jaw dropped. Literally. It’s a hit rate of about 0.1%.

FiL paused for a minute and said: “He must think you’re really good”.* And he was genuinely surprised. Still pleased but in a different way, with a bit more respect for what I’ve done. Which is good, because up until now, everyone has been encouraging me in what has been, in essence, a really time-consuming hobby and they must have asked themselves and each other why I’ve been persisting. I asked a few other non-bookish people and they were under the same impression.

So, if you secure representation, do bear in mind that you might have to do some explaining. Not to brag (although you’ve achieved something great so you’re allowed to brag a little bit) but just to explain the context in which you’ve done that.

* Not that I think having an agent necessarily means I’m good. I think it implies I’ve reached a certain level of competence. What it actually indicates is that I have come up with an idea and a novel that is saleable. It’s not great literary fiction and I’m not saying anything deep about the state of our nation. There is nothing wrong with being a storyteller and entertaining people and don’t let anyone tell you otherwise.

This entry was posted in My Writing, Writing and tagged agents, literary agent, other people, writing. Bookmark the permalink.