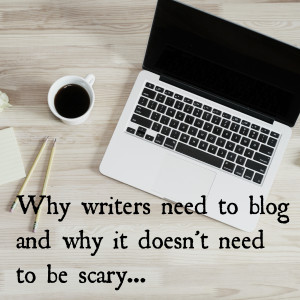 Authors are regularly told by their agents and their publishers that she should be using social media to promote their book. That’s good advice and in the past I’ve given plenty of talks to authors, publishers and booksellers about how they can use social media to build a community around their work. However, blogging has changed in the last few years and many writers I’ve spoken to are hesitant about dipping their toe in the blogging pool now that there’s such an emphasis on branding and advertising and sponsorship.

It’s true that blogging is no longer the homespun, making-it-up-as-we-go-along medium that it was and it’s also true that there are some bloggers being paid truly eye-watering sums by advertisers for a single Instagram post, being compensated with 5-star holidays in return for a few paragraphs of text or making millions of dollars for advertisers (for which they naturally receive a handsome commission). Blogging advice these days is full of exhortations to study SEO, to define your brand, to join affiliate schemes, to find your niche and to monetise, monetise, monetise.

All quite alarming for a writer. Words might be our tools but will blogging successfully make us no more than an advertising copywriter? And besides, we’re writers – we work at home in our pyjamas. In the main, we’re not glamorous 20-somethings tripping about in designer gear and nor do we want to be. That some blogs by authors are so appalling with endless pop-ups and sell-sell-sell really doesn’t help.

But blogging is a really useful tool for a writer. It can connect you to your readers, help you to interact with the wider literary community and even let you try out new writing styles. Despite the prevalence of sponsored posts and the production of ‘content’ at the expense of substance, blogging can be a fun way to engage with readers, other writers, booksellers, publishers, agents… so many people.

So, given that I’ve been an advocate of social media in the past and given that people are still telling me today that they want to blog but don’t know how or are nervous of putting their lives out there, I’m going to write a series of posts giving advice on how to begin blogging. I’m going to aim them at writers so don’t expect advice for fashion bloggers and as I can’t even put eyeliner on straight I doubt I’ll have a lot to offer for budding beauty bloggers.

My advice is not for the people who want to be the next big thing in whatever niche they think advertisers might wish to sponsor. I wish you well but I can’t help you.
I want to talk to the people who have something to say, who aren’t obsessed with numbers to the detriment of their writing, who come from a position of authenticity. We need to go back to the idea that your blog is your corner of the internet and that you don’t have to fit in with other people’s rules if you don’t want to. Or at least, not always.

Over the next few weeks – Wednesday mornings, bright and early – I’m going to talk about the aspects of blogging that are important to keep in mind and some of the supposed ‘golden rules’ that can be ditched. We’re going to talk about the basics and also see which newer developments in blogging can be of use to us. I’m going to give you some exercises to complete and after six weeks you should have an idea of what shape your blog might take. If people are interested, I’ll then work through some of the more practical aspects of setting up a blog.

Do share this with as many writers you know who don’t currently blog or any who do and might be a bit disillusioned, needing some reassurance that their own furrow is the one they should be ploughing rather than feeling that someone else’s furrow is better than theirs. Anyway, enough with the agricultural metaphors – see you Monday.

This entry was posted in Blogging and tagged advice, blogging, blogging for writers, social media. Bookmark the permalink.