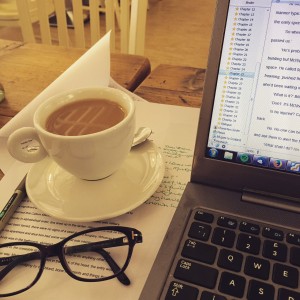 It’s been while since I was here, albeit a while where ‘write blog post’ has been a constant fixture on my to-do list. Then again, so has ‘go to the gym’ and ‘replace bathroom sealant’ and those haven’t happened either.

By far the most pressing thing on my list has been ‘finish editing manuscript for prospective agent’ and I’ve still to tick that off. Until I have, I’m having trouble committing to anything else, even writing a blog post. When I’m not editing, I’m distracted because I know I should be.

And why is the editing not completed? After all, I have an agent that I’d really like to be represented by waiting to see it? That’s a great position to be in.

I suppose the problem is that I worry whether the changes I’m making are what’s needed. Some of the chapters I’ve edited have been rewritten three times. I’m getting there and by and large I’m pretty confident that the changes I’m settling on are the right ones. It’s a slow process though.

That’s one of the problems with first novels – to get the agent and the book deal it has to be perfect right off the bat. With subsequent books, you’re able to take soundings from your agent and editor from the start, even when it’s a germ of an idea, but in order to get the agent and the publisher you need to make it as good as it can be with hardly any input from others who know.*

While I’m making excuses, I do have to admit that I’ve lost some time due to family health problems, work happening on the house and The Son’s upcoming exams…

But I do have to get this finished. I’m actually planning how that’s going to happen (at last, I hear you cry – I’m sure everyone else already does that) by actually breaking it down into chunks and putting it into my diary so that it gets done. That also makes it feel like less of a mountain to climb.

I’m off now, but hopefully by the end of the month I’ll be back to tell you that the manuscript is polished up and that I’ve clicked ‘send’ on the email to send it to the prospective agent.

*Word to the wise – join a good critique group. The one I’m part of is amazing – positive and tough and funny and inspiring. If this ever makes it into bookshops it will be partly due to the perceptive comments of those writers.

This entry was posted in My Writing, Writing and tagged editing, life lately, writing. Bookmark the permalink.