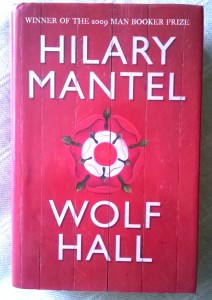 Picking one book out of the dozens I don’t finish each year was almost impossible. Books arrive faster than I can read and the ones sent by publishers are sometimes indiscriminate, often not titles I would choose. That can be marvellous in that I discover authors that I would never gravitate towards normally, but it does mean that I abandon a lot of books.

So I picked the book I’m most ashamed of having given up on and it’s Wolf Hall by Hilary Mantel.

I read it when it first came out – before that actually because I had a proof copy – and it took me a while to get into. I really liked the idea of telling the story of Henry VIII from the point of view of Thomas Cromwell but there is a large cast of characters and names are used relatively rarely – I had to refer to family trees a great deal. Also, the pronoun ‘he’ is used a great deal with little speech being attributed – ‘he said’ is used often but where there are two or three characters talking in a scene, I needed to skip back often to check who had said a particular thing.

Gradually I got used to that and was about two thirds of the way through when we went away on holiday and I forgot to take it with me. When I got home two weeks later I somehow never went back to it and so it remains on my shelf, bookmark in place. And of course, unlike most books that I abandon, Wolf Hall was a huge bestseller, won awards galore and was almost universally admired, leaving me feeling rather guilty…

This entry was posted in Random... and tagged Hilary Mantel, unfinished. Bookmark the permalink.