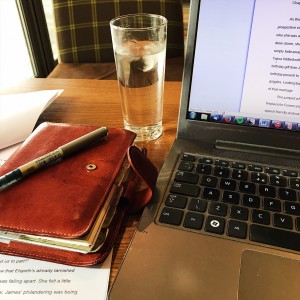 That’s it – the revised manuscript has been sent to the agent who suggested some tweaks. I have rewritten chunks, edited the rest and I think the novel is better for it. It has taken far longer than it should have, for all sorts of reasons, but it’s finally done. I hope he likes it. But if not, I have other plans – I am firmly of the conviction that if you have a back-up plan you’re less likely to need it than if you don’t have one.

Why has it taken so long? Well, save for some relatively-minor-in-the-scheme-of-things family-crisis stuff, I think one of the reasons is that because I’m just setting out as a writer, as yet un-agented and unpublished, and so my writing is currently nothing more than a time-consuming hobby. That’s not to say that the only worthwhile writing is that which generates income, but it does mean that in my case  it has to take a backseat to ‘proper work’. So this novel, with its lengthy, and probably still incomplete, gestation seems to have taken forever to finish. I’m sure the next one will be faster, and if I’m being paid for it – ah, the aim of being a professional writer – I’ll be able to justify prioritising it over other things.

So, now it’s just a question of waiting, which is hellish for me as I am probably the least patient person I know. But as I find it hard to read fiction when I’m writing, it’s a great time to catch up on some of the teetering pile of novels on my bedside table.

This entry was posted in My Writing, Writing and tagged agents, editing. waiting, writing. Bookmark the permalink.