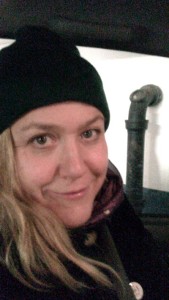 I first became aware of Tiffany Murray when I saw her described in the Guardian as “a glam-rock Dodie Smith“. Given how much I love I Capture the Castle, I was always going to be interested in her novel Diamond Star Halo. I absolutely loved it and hand-sold it to masses of bookshop customers, most of whom returned to tell me how much they’d enjoyed it. The story of a girl growing in the Welsh borders on the farm that her parents run as a recording studio; elements are slightly autobiographical as Tiffany’s parents ran the Rockfields recording studios, best known as the birthplace of Queen’s A Night At The Opera album. Halo grows up there with a sister, a brother, a quasi-foster brother and the rest of her eccentric and unnerving family. If you’re a fan of this book do read to the end of the interview for some interesting news.

Diamond Star Halo was followed by Sugar Hall, a very different type of novel. A gothic ghost story set in a crumbling country house on the English/Welsh border (based on Littledean Hall in the Forest of Dean and whose ghostly atmophere I can attest to), the narrative grows steadily more sinister as we follow the post-war lives of Lilia, Saski and Dieter as they seek refuge there. I loved it and the feedback I’ve had from Glenogle & Bell subscribers to whom I’ve sent it has been very positive.

Happy Accidents (Tiffany’s first novel) and Diamond Star Halo were shortlisted for the Bollinger Everyman Wodehouse Prize, and Guardian critics selected Diamond Star Halo as one of the best of the year. Sugar Hall was picked by David Mitchell in his Top 6 Ghost Stories along with Stephen King and Shirley Jackson. Tiffany has been a Hay Festival Fiction Fellow and a Senior Lecturer in Creative Writing.

I think this might be unanswerable because it’s the question I ask every morning (‘why, why, why?’) as I hit my head against the keyboard/notebook. I want to say it’s because I can and that’s a privilege. I want to say it’s because (after the event) I can’t quite believe I have created these new world, these attempts that reveal something about what it’s like to be human. I want to say these things and of course that is part of it, but most of the time I just keep asking, ‘why, why, why?’ Then the ritual is over and I get on with it. It is a job after all.

Childhood scribbler. I made my own dolls (stuffed with hard newspaper, they were awful, frightening actually), and I’d write about them on spare sheets of paper. I found some old school ‘story time’ exercise books last year. Hysterical. Do you remember that time at Primary School when we were told to ‘write quietly in your exercise books for the afternoon’? Oh, those days. We’d do that and then make pastry men. No tests. No evaluations. We did OK.

My academic background dictated that I do the ‘sensible’ route, so I switched from a PhD in Caribbean Lit. at NYU to an MA and PhD at UEA (Fiction). Perhaps getting into the MA was the big break? In any case, a few published short stories later came an agent. Then Flamingo bought my first novel Happy Accidents, Boyd Tonkin from the Independent liked it before publication and the tag ‘Woody Allen visits Cold Comfort Farm’ stuck.

Silent solitude. I battle with the neighbour’s chickens, even with noise cancelling headphones. Then when I’m out of the forest (where I live) I realise I’m more relaxed jotting in the noise of a city. And I use a laptop, but I don’t think it’s healthy. I think paper works better. It’s hard to shift at times, though. I cross out too much on paper.

The words on the page and the life of the writer are so intertwined nowadays, more so than ever. It’s celebrity sparkle vs Roland Barthes (I admit my theory is rusty). So the author I’m most fascinated by is Emily Bronte because of the life and the books. I want to walk with her and Keeper (her big mastiff cross) out to Top Withens. I’d like to carve our initials on hard Yorkshire stone (with hard Yorkshire stone). I’d ask her if Keeper is really and truly Heathcliff.

A more realistic pop at this might be Toni Morrison. Although I did meet her at Hay and all I asked was if she was warm enough. She laughed (she had a blanket around her shoulders). See, it’s hard to talk to those we admire. We end up asking about the little things.

Q: What book do you recommend most often to other people?

It’s a tie between In Youth is Pleasure by Denton Welch and The Brief Wondrous Life of Oscar Wao by Junot Diaz. I feel Denton (dead, not celebrated enough) needs my vote more than Junot.
(But then I find the classics are not being read as much as they used to be…..so I bark on about all three Brontes).

Oh, heavens. Most of the 19th and 20th century books I read. If I say ‘Beloved’ that would be ridiculous. That book is her blood not mine.

Teaching. I’m a lecturer. My ability to communicate with dogs (not a joke).

Q: Where is your happy place?
Iceland in summer.

Q: If you weren’t a writer what would you do?

Work at the Arctic Fox Sanctuary in Iceland, and/or study wolves (although I wouldn’t wear a sweat-shirt with a wolf and a full moon on it). Work with Dr John Bradshaw.

Can I whisper for this one?
….it’s hard, it is hard. In truth it’s impossible to make that thing, ‘a living wage’ – but that certainly shouldn’t be a reason to write (money). It never was, was it? (Emily and Charlotte and Anne). I’d kill the Book Agreement. Publish fewer books and….oh, I’ll stop now.
On the plus side, having a publishing house, a bookshop, a festival, another writer, a reviewer, a reader gunning for your book is the best.

See above. Don’t write ‘to market’. Only you can write what you are writing, no one else can. So already you are streets ahead. Fact.

As far as the business goes – take a look at all of the platforms. Unbound being a great example.

I am adapting my second novel Diamond Star Halo for a feature and working on my fourth novel, set in Florence at the turn of the last century.

Thanks so much Tiffany and I’m so excited to hear the news that there’s the possibility of a film. And if you haven’t read Sugar Hall or Happy Accidents or Diamond Star Halo, then do rush out to your nearest independent bookshop now.

This entry was posted in Author interviews and tagged Tiffany Murray. Bookmark the permalink.