I have a few posts mentally scheduled – what I’ve been reading, how my garden is doing and some of the gorgeous things I’ve cooked among others – but I like to think that I have an excuse for my indolence.  When the sun finally appeared in June, I decided that we absolutely had to go away on holiday.

That was the cue for hours of Googling, but everything we liked the look of either didn’t want to also welcome Teaga the Leonberger (and fair play to them; she is enormous and hairy) or was booked.  Because apparently most people book more than ten days in advance… Or had truly hideous furniture – cast-off brown Dralon, beds that looked lumpy even on the photos, kitchens from the 1970s with the kind of Baby Belling cooker that was in this place until we gutted the kitchen. I don’t know about you, but when I go away I want to stay somewhere at least as nice as my own home. Who wants to pay several hundred pounds to spend a week somewhere that’s like the pre-renovation photos?

And then I found this place… I emailed, sure that it would be booked but it was available and the owners were incredibly patient in answering my dozens of tiny queries because it’s a long way to Cornwall from Edinburgh and I wanted to make sure that it was perfect.  So we booked. 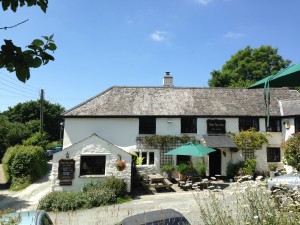 The drive down was ok – we stopped overnight at my parents’ in Worcester – although the second leg from Worcester to Fowey was a bit wearing as it was so hot.  We had to stop a few times to give Teaga water and at one point we noticed her sitting weirdly on her bottom with her feet in the air and we realised that it was because the tarmac was so hot it was burning her paws!  So straight back in the car with the air-con on full blast for her.  We stopped at this heavenly country pub for lunch and ate delicious sandwiches in their shady garden. Teaga very much enjoyed that, especially as she had a few chips.

Parking in Fowey is a nightmare.  In fact, it’s best to forget parking. I’ve been visiting the town for well over 30 years and it seems to be worse – maybe it’s just that cars are getting bigger?  We drove through very slowly between walls with grooves worn into them from wing mirrors and following instructions from Nicole, we stopped fleetingly outside the house, hazards flashing, and hurled our belongings into the hall before heading to the town car park to abandon the car for the week.

The house is built into the side of the hill and deceptively small and cottagey. The ground floor has one bedroom and the first floor has two bedrooms plus a small room with a bunk bed along with the bathroom and the wet room. Then it’s upstairs to the huge living space with is gorgeous – well equipped and planned kitchen, dining table away to one side in a light-filled nook with windows on three sides and a comfortable sitting area.  The star of the show though, and what you keep being drawn back to, are the huge windows.

Then it was up the last flight of stairs to see if the roof terrace lived up to my dreams… This was the view: 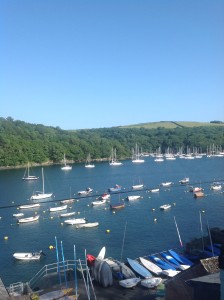 I think we can safely say that my dreams were lived up to. It was a huge terrace with plants and a table and very comfortable chairs and the the cutest laundry room in a summer house. And although we visited the Lost Gardens of Heligan, the beautiful Trewithen gardens (which deserve a post of their own) and the Eden Project, quite apart from other expeditions, we spent many days and evenings just reading on the terrace and watching the harbour go by.

On a walk around the hills, Malcolm also found the abandoned watermill of his dreams but as he refuses to carry a mobile most of the time, I can’t share photos of that with you.  I have pointed out though, that our son leaves school in five years and so he’s got a little time to track down its owner and persuade them to sell it to us….

Holiday heaven though – and much needed and appreciated.  Two weeks on, we’re still very chilled out…

This entry was posted in Travel. Bookmark the permalink.