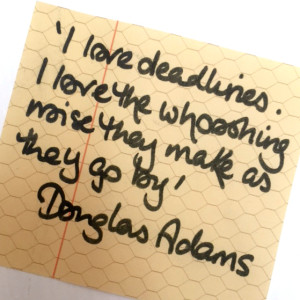 “I love deadlines. I love the whooshing noise they make as they go by.” So said Douglas Adams.  But I need deadlines. Give me all the time in the world to do something and it doesn’t get done. Give me a deadline and I’ll usually make it.

One of the problems with writing your first novel is that you don’t have a publisher or an agent giving you deadlines. You can take as long as you like and in some ways that’s good. After all, you don’t want to rush things, getting it right is better than simply getting the writing done, art doesn’t work to a schedule…. That’s all true – you don’t want to submit a manuscript that isn’t the best possible version of itself because that’s not going to do you any favours.

Then again, if you give some of us all the time in the world then we’ll take that, procrastinating and polishing and titivating without end. I’m at that stage; the first half of the book is written, polished up to a degree and I’ve planned the rest but I’ve been taking my time over it.

Remember how I told you how last month an agent that I’d love to be represented by asked when he could read the whole manuscript and I casually said that it would be done by Easter? Well, Easter is looming and that’s really focussing my mind.He knows the relationship that authors have with deadlines but even so he’s not going to wait for ever.

I’m editing and writing like a demon and a dear friend, probably the best beta-reader I could hope for, is going through it chapter by chapter telling me what’s working for her and what isn’t. She’s frank and knowledgeable and has a very sharp eye and she knows that being nice is no use to me whatsoever.

So March’s writing goals are:

This entry was posted in My Writing and tagged deadlines, Douglas Adams. Bookmark the permalink.