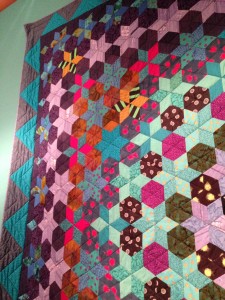 Kaffe Fassett quilt from the exhibition at the American Museum in Bath that I mentioned last week. Here just because it’s so gorgeous rather than particularly relevant…

An assortment of blog posts, articles and other randomness that have interested, informed and inspired me this week.

Messy Nessy Chic is one of my favourite blogs – and not just because it’s written by someone called Vanessa.  Ex-pat Brit now based in Paris, Messy Nessy curates the offbeat and intriguing into a site which is always worth reading and can lead you off on many a previously unknown diversion.  An excellent coffee-break diversion.  This post about Twickenham’s Eel Pie Island and its place in music history was fascinating and the island is now mentally bookmarked as the only place I could bear to live if I had to move to London.

who sums up the feeling most of us have about the Man Booker Longlist. Can we be bothered to read all the longlisted (or even the shortlisted titles)? Of course we can’t.  But do we want or need to be able to express an opinion if asked about those novels? Yes we do. His suggestion – download the free Kindle samples from the Evil Empire and base your judgement on those seems a winner to me.  If you’re too lazy even to do that, he’s summarised his reading in a very helpful manner including his predictions for the shortlist.

One of my favourite blogs is that of architect Ben Pentreath. His company restores historic buildings, designs new ones and even has an interiors shop, Pentreath and Hall.  The shop is in Bloomsbury where we’ll be staying in October and I’m sure I’ll be coming home laden.  Ben’s blog is beautiful and thoughtful with the most gorgeous images, such as those in this post about his recent trip to Greece. His posts about the garden at his Dorset parsonage are heavenly and entirely responsible for the vast bulb order I made recently and now need to plant.

Afternoon tea is one of life’s great treats and if you’re in Edinburgh, the afternoon tea in the Palm Court at the Balmoral Hotel is a joy. I liked this post from the foodie blog of Helen Graves about how to do afternoon tea properly and I agree completely – particularly about things in shot glasses, cheese-shaped wedges of cake and the absolute wrongness of whipped cream to accompany scones.

Mary Beard (that’s a link to her TLS blog, A Don’s Life) is a heroine of mine for her ability to thoughtfully and effectively deal with internet trolls, to rise above bitchiness such as that of AA Gill (Gill’s orginal post is behind a paywall) and for the way that she can take arcane classical history and make it accessible and interesting to a modern audience without the need to dumb it down.  I’m interested in Latin and if I’d had a teacher more like her in the Upper Third rather than one who was impatient and had zero teaching ability then my academic life might have been very different.  This interview in The New Yorker is marvellous.

Finally, this piece by Elmore Leonard for the New York Times on rules for writers is old but still an interesting read.  I like his point about not using a never using a verb other than ‘said’ to carry dialogues.  It’s too easy to feel that you have to vary things and I have to edit a lot of those verbs on in second drafts.  I think Leonard might be a little rigid but it’s something that’s good to keep an eye on.  Likewise adverbs.

This entry was posted in Recent links I've loved. Bookmark the permalink.