I haven’t blogged as the last fortnight has been frantic – two new books published, we bought a house at auction and we’re off to London on our next home exchange trip next week and so we’ve been planning that.  Here’s my roundup of  some of the blog posts, sites and articles that have interested me over the last week or so and which I want to share more widely. 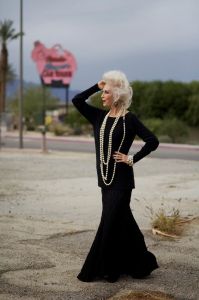 It often seems that fashion designers and retailers forget that women exist over the age of 40, or think that we should embrace beige in all its polyeser, elasticated forms and I’ve long been a fan of Advanced Style, a street fashion blog that celebrate the older, incredibly stylish women of New York.  I habitually wear black and when I’m older I would be delighted to have even a fraction of the elegance of that marvellous woman over there on the right – those amazing long strings of chunky pearls, that hair and that confidence – to the right.  The blog’s been turned in to a book which I used to stock at the bookshop but now there’s a documentary.  There are showings in (mostly) arts cinemas all over and I’m disappointed that I’m not going to be able to get to the Edinburgh showing but it’s also available to download and that’s going to be my treat next time I’m having a duvet day.  If we’re lucky, we’ll get to be old and if we do then we owe it to the people who we’ve lost along the way to make the most of it.

I love travelling by train – long distances, not the Scotrail service from Edinburgh to Glasgow obviously – and although I don’t have a bucket list (such a depressing concept – what do you do when you’ve ticked it all off? Turn up your toes and wait for death?) if I did, travelling the length of the Trans-Siberian railway would be on it. I quite fancy the Orient Express too for all its glamour and elegance and the iconic nature of it but the Trans-Siberian holds a particular allure, even though the luxury and the bubbling samovars of tea are no more.  I think it’s the sheer magnitude of the journey – 10 days that takes you from the Far East to Moscow, such an amazing variety of people and places.  The Husband thinks I’m mad and if I ever go I’ll be travelling alone or with whichever long-suffering friend I’ve persuaded to join me.  This article by Michael Arditti in The Independent was fascinating although given his top tips and the end and given my temperamental back, it sounds like a journey to make with a good stock of painkillers. But worth it I think.

While we’re on the subject of Russia, these colour photographs of pre-revolution Russia taken by Sergey Prokudin-Gorsky are fascinating.  Over a decade or so, he travelled the Russian Empire recording its people and places in around 10,000 colour images.  He left shortly after the revolution and eventually his archive passed to the Library of Congress who have now made the digital images available free online.  I spent ages browsing these – the unexpected use of colour gives these images of a long-gone age an immediacy that black and white or sepia lack, removing the distance between subject and viewer.

Property develope Sam Collett’s blog is always worth a read and she’s just flagged up this beauty in Devon coming up for auction in November. I love it and want it desperately despite the state of it or maybe even because of the state of it.  The auction guide is £150k and I suspect it will go for a good bit more which makes me feel better about the fact that the rest of the family are less that enthusiastic about my suggestion that we sell up and move to the other end of the country, especially as we’ve just bought a rather sad little cottage to convert and refurbish.

That’s it for now – see you next week when I’ll be back from London and fresh from seeing the Rembrandt exhibition that’s just opened and the amazing installation of poppies at the Tower of London.