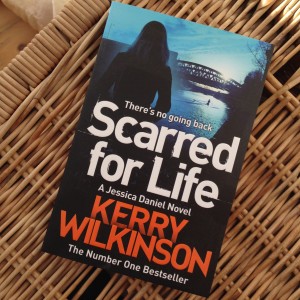 Scarred for Life by Kerry Wilkinson.

Although I read a fair amount of crime novels, the Jessica Daniel series by Kerry Wilkinson had rather passed me by until Kerry’s publicist sent me a copy of Scarred For Life, the latest title in the series. I really enjoyed the book and liked Jessica, Kerry’s Mancunian detective inspector very much. I’m definitely planning to go back and read some of the earlier novels in the series. I don’t have space to review the book in depth, but if you don’t want to take my word for it then a little light searching will find you literally thousands of reviews of his books.

I did however pin Kerry down for an email interview as I was curious about his journey from self-published amateur to best-seller and darling of his publisher, Pan Macmillan. Read on to the end to find out how you can be in the draw for a copy of Scarred For Life.

Q: Kerry, your career seems to have been jet-propelled. When did you start writing?

KW: In terms of actual writing, I’ve been working as a journalist, both paid and not, since I was about 13 or 14. I wrote cricket match reports for the local paper which are probably horrific crimes against the English language in retrospect. In terms of fiction, I only started in 2011. I’m not sure it can be called a ‘break’ as such, but I self-published in the same year and things happened from there.

Q: Before you self-published, did you try the conventional route of submitting your manuscript to agents and publishers?

KW: I never set out to be a full-time author, I was only trying something new to see if I liked it. I looked into a traditional approach – three chapters to an agent, wait for the rejection, start to hate yourself and life in general – but I’m not much of a tradition-type person anyway. I saw the ‘self-publish with us’ button on the bottom of an Amazon page and figured I’d give that a go.

Q: You were hugely successful as a Kindle author – their best-selling author in 2011 – so what lured you over to conventional publishing and Pan Macmillan?

KW: I’d be lying if I said it wasn’t the money… On top of that, working with a traditional publisher offered a chance to do something new. Things have gone well, so I’ve stuck with it. I do miss the control, the tinkering and the experimenting of self-publishing, though. The actual writing of the book is only part of the job of being an author in 2015 and I enjoy many of the other bits that go with it – especially the online, digital stuff. Interacting with readers before, during and after a release is massively rewarding as well.

Q: One of the big differences between self-published and conventionally published books is that the latter will have been edited – sometimes heavily. How has that gone – did you have to change much or are the novels out now in paperback pretty much the same as the originals?

KW: With my young adult novel, Reckoning, there was a lot of rewriting, reordering and tinkering. It’s a lot better for it. My crime books have very little work done to them. The second draft I send to my agent is almost exactly what comes out in print, save for correcting a few typos. I don’t know if that’s a good or bad thing. As long as readers enjoy the books, I guess that’s good!

Q: I’m glad you mentioned Reckoning as I was going to ask whether you’re planning to concentrate on Jessica Daniel novels or whether you have plans to branch out?

KW: Both! I’ve written 13 Jessica books and plotted a 14th. Nine have been published, with number 10 out in January 2016. But I’ve got loads on the go. There’s a young adult-fantasy-adventure trilogy, the second book of which is named Renegade and is out in May 2015. I have a spin-off from the Jessica series featuring a private investigator named Andrew Hunter. His first novel, Something Wicked, is already out as an ebook and is coming out as a paperback in July. Then I have a standalone crime novel, Down Among The Dead Men, that is set in the same world where Jessica and Andrew exist. That’s out as a hardback and ebook in September or October of 2015.

Q: What’s your writing routine like? Are you someone who has to have complete silence and a special pen or can you tap away in cafes?

KW: I can write anywhere. Trains, planes, benches, bus stations, airports, passenger seats of cars, hotels, shop window fronts in the Arndale centre…wherever. Generally I work at home on my sofa, laptop on, er, lap. I always have something on the go, whether it’s writing an actual novel, or plotting one. I get on with whatever interests me at the time. I might be writing a first-person novel for young people, or a third-person crime story, or something for Jessica. Sometimes I might write a couple of Jessica novels back-to-back, other times I’ll forget about her for a year. I don’t worry too much about it. Whatever’s in my head at the time.

Q: That’s a lot to keep track of. Are you a plotter or do you start with a scene or an image and see where the story takes you?

KW: I usually start with a single line. An elevator pitch. One sentence that sums up the twist, tone or basis for the novel. That becomes a bullet-pointed chapter-to-chapter breakdown, which then becomes a full-on plot that can run anything up to 16- or 17,000 words. When that’s done, I’ll re-read it, make sure there are no gaping plotholes or problems, then get to the actual writing.

Q: Your background is interesting – a successful self-publisher now a best-selling author with one of the country’s biggest publishers. What would be your advice for would-be writers?

KW: Get on with it. If someone wants to write, then write. All you need is a pen and paper and/or a laptop.

KW: 86th Floor Comics. They’ve had some money from me over the years…!

I have a copy of Kerry’s new Jessica Daniel title, Scarred For Life, to give away. If you’d like to be in with a chance, leave a comment below. UK only I’m afraid because of postage costs and the draw closes at midnight on Sunday 15th March. Good luck!