Laptop and latte – the best cafes for writers, Edinburgh and beyond 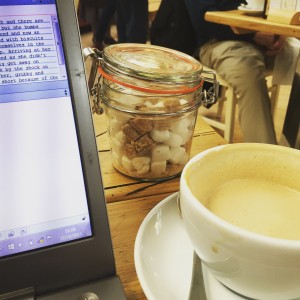 JK Rowling famously wrote Harry Potter in Edinburgh cafes (although not in as many as claim to be the birthplace of Harry P. I suspect) while other writers can’t imagine in other than complete silence or away from their desk or without particular background music. I’m in both camps. I prefer to edit at my desk, ideally without anyone else in the house – the family are warned not to interrupt me unless bearing a cup of tea – and although I don’t need silence, I do tend to have some instrumental classical music (Bach or Tangerine Crush for preference) to block out the noise of other people, yapping dogs and the like. The downside of living in the city centre is that you’re never far from other people’s lives.

But for first drafts, I love to write in coffee shops. I’m a truly dreadful procrastinator and if the words aren’t flowing then I can always find something else, ignored for weeks but now suddenly vital, that I absolutely must do rather than stare at a blank screen, searching for words that stubbornly refuse to come. Writing in a cafe shuts me off from the world but also gives me the company of others, the white noise of conversation helps me concentrate and someone brings me coffee at regular intervals without expecting much in the way of social interaction. Perfect.

Obviously there are rules for the perfect writing spot. They must have enough people that I don’t feel conspicuous, the conversational hubbub must be a background buzz – if I can hear individual conversations then it’s really hard not to eavesdrop a little bit, especially if it sounds juicy. We don’t mean to be rude but writers are magpies by nature. Sometimes it takes tremendous will not to lean over and interrupt to ask ‘and then what did he do?’.

Nor can writing cafes have a wi-fi connection otherwise the procrastination urge kicks in and I check my email or Twitter, or I have a quick chat with my mother on Facebook or I see whether the parcel I’m expecting is on its way or I just Google to check a fact and disappear down a fascinating rabbit hole of 1920s fashion or the history of motor racing. If I can’t get peace at home to work because we’ve workmen doing something then I do sometimes escape to do those things elsewhere but that’s what Starbucks and their free wi-fi is for. Writing cafes must be connection-free.

So here’s a round-up of some of my favourites – hopefully my readership is low enough that I won’t find them swamped with other writers next time I venture in with my laptop and an idea fizzing around my brain. 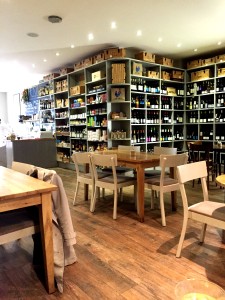 Top of my list of Edinburgh cafes for writing in is Henri on Raeburn Place in Stockbridge, only ten minutes’ walk from home. The tables are tucked away at the back behind the deli counter – they are my very favourite place to buy cheese – and not only do they have no wi-fi, there’s scarcely any phone reception so it’s perfect for uninterrupted writing. Tables are spaced sufficiently that you aren’t overwhelmed by the conversation of others and besides, the ladies of Edinburgh do not shout when discussing their golf or their grandchildren. That would be utterly vulgar. The coffee is fantastic, the staff are friendly and efficient and if I’m there without having had breakfast then they do lovely croissants. Aside from morning coffee-and-writing sessions, they’re open late on Friday evenings and do huge plates of charcuterie and the aforementioned cheese with great bread. Choose a bottle of wine from the shop and pay a very reasonable corkage charge. 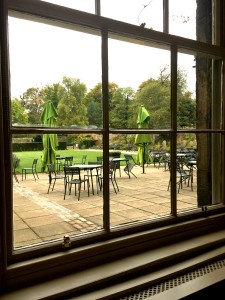 One of the other Edinburgh coffee shops that I favour is found in the basement of the Gallery of Modern Art. It’s perfect if I’m out and about running errands or if it’s stotting down – sadly not a rare occurrence here – as it has a car park and I can nip between the raindrops from car to cuppa in less than a minute. It’s not as quiet as Henri as it’s quite an echo-ey space but if I can get a corner table by the window, it’s a very nice spot to tap away for an hour or so. And if the words don’t come and I need inspiration I can go upstairs and look at paintings, especially my favourite Scottish Colourists. Or look at the artwork that contains my late brother-in-law’s name. 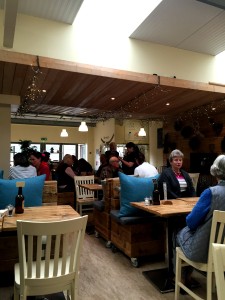 Forty-five minutes or so outside the city, and where I’m writing this in fact, is The Walled Garden at Archerfield. Based in an old Victorian vegetable garden on the Archerfield estate, there’s now a bright modern space containing a cafe, bar, gift shop, farm deli and microbrewery. With reclaimed wooden tables and a mixture of wooden chairs and benches with comfy tweed cushions, I can always find somewhere to settle myself and get my back comfortable (truly I am a martyr to my lumbar vertebrae!) and a spell here usually results in a good couple of thousand words. Plus supper for the family if they’re lucky and I get side-tracked by the deli. It’s quite a distance just for coffee-and-writing but it’s out in the East Lothian countryside and M leaves me there while he spends an hour or two walking along the beach. We really need to get another dog… 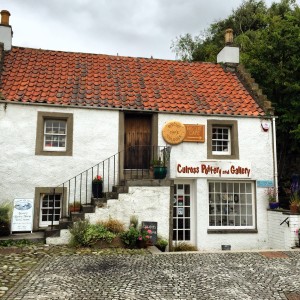 Even further afield, but a coffee shop I wrote in often while M was renovating our rental property in Fife, is The Biscuit Cafe in the conservation village of Culross. Tucked away beside the 17th century Palace, owned by the National Trust for Scotland, this is a tiny place which combines its coffee-and-scone activities with a pottery. The coffee’s great and the cafe space is airy and great for writing but it’s also good for people-watching and I had the most amusing conversation with a couple of American Outlander fans who were visiting some of the filming locations (Culross stood in for the village of Cranesmuir) and who were disappointed by the lack of men in kilts. I had to let them down gently, explaining that as well as being unlikely to see that many kilts, they were also unlikely to see that many men who looked like Jamie Fraser… 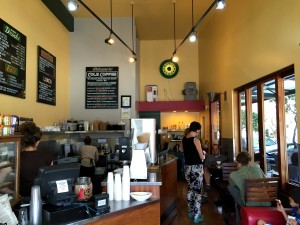 Even further afield is Cole Coffee in Rockridge, Oakland, just across the Bay from San Francisco. We spent four weeks here in the summer, house-swapping with a couple of retired academics who were thrilled to be able to visit the Edinburgh Festival, and Cole Coffee is on the corner of their street. To be honest, it’s not a cafe where I’m at my most productive because their little pavement tables are such wonderful vantage points from which to people watch and eavesdrop from. Frat boys from Berkley cruising down College Avenue in their Jeep Wranglers; techies from SF flush with lucre and thrilled if they’re able to snap up a 1920s Craftsman house for less than a million dollars (seriously, I could write masses about the gentrification of this area) whilst they studiously ignore the homeless guy checking out the contents of the bin next to them; the local musicians, poets and street corner philosophers sharing their thoughts over their morning cup of Java. Truly, it’s somewhere I could sit all day although I’m not sure it would be great for my word count. And the sunshine… sitting outside a cafe in Edinburgh is an infrequent joy, and you need to get out of the wind. But 25 degrees of warm sun, shining from a cloudless blue sky is glorious and the wind is just the lightest of northern Californian breezes? Perfect.

So that’s five of my favourites if you need to find somewhere to settle in for an hour or two with your laptop. Do you have any recommendations?

This entry was posted in My Writing, Places to go, Travel and tagged Archerfield, cafe culture, California, Culross, East Lothian, Edinburgh, Fife, Gallery of Modern Art, how I write, Stockbridge. Bookmark the permalink.