If you only read one of the links on this post, this is the one to go for. This piece from NY Magazine looks at a single block in Brooklyn, New York and the way that the neighbourhood has changed over the years, becoming less and more desirable, how the demographics of the residents have changed, how the area has been affected by wider economic policies etc etc. I know that a piece about gentrification of now-hipster neighbourhoods doesn’t sound promising but trust me. And the almost-interactive layout is pretty cool

Joanna Cannon is someone I’ve known via social media for what feels like years. She’s a fascinating person and a great writer and her debut novel, The Trouble With Goats and Sheep will be published early next year. I’ll be reviewing the book and hopefully Jo will have time to be interviewed around publication but in the meantime, here’s a taster of her rich, compassionate writing, a reflection on one of her own experiences as a hospital psychiatrist, Death and Raincoats.

Lost Edinburgh is one of my favourite Facebook pages and is a great source of images for any writers of Edinburgh-set historical crime fiction. Which is probably just me. This piece from the Evening News lists some of the much-missed Edinburgh shops such as John Menzies, Goldberg’s and Woolworth’s, the first and last of which The Husband has fond memories of. I was particularly interested in the description of Maules , where my characters would have shopped.

Also in the Things That Have Vanished category, this post from the ever-fascinating Messy Nessy about the Victorian mansions of Los Angeles downtown area and how they were replaced by skyscrapers and strip malls is really interesting and a little sad. Victorian archtecture is sometimes sneered at but I love its intricacy and its pomp. I love the Victorian houses built by new money – so braggardly and over-the-top. And why not have a turret and a porte cochere and stained glass and an orangery and another turret if you want to? There are some Victorian gems in Edinburgh built by people who wanted to show off and it seems that the monied classes of southern California wanted to do just the same. 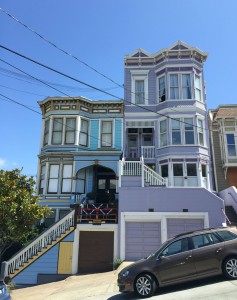 I love Jacquelyn Clark’s blog and this post about her visit to San Francisco brought back lots of happy memories of our fabulous month there last summer. It was an amazing trip and there’s still so much of the area to explore that I’ll be hankering to go back for a long time. Until we do in fact! The painted wooden houses in SF are gorgeous and I love the way that they work around the vertiginous hills. These houses are just up from Imagiknit, the most wonderful yarn shop.