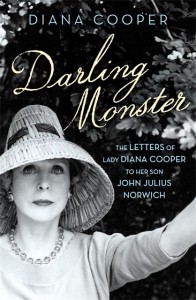 “I looked in on Chips in London and found the Duchess of Kent, her sister Countess Toren, the reigning Prince and Princess of Liechtenstein, the Ranee of Kapurthala and the King of Egypt’s sister.  It was like a stamp album.”

Lady Diana Cooper was a fascinating woman.  A deb famed for her beauty who gave up her glamorous life to work as a nurse during World War One, she later dabbled in journalism and acting before marrying Duff Cooper in 1919.  Darling Monster is a collection of the letters from Diana to her son John Julius over a period of 13 years, from 1939 when he was evacuated to the USA to 1952 when he left Oxford to marry and to join the Foreign Service.  That period saw her dig for victory at the family’s holiday home in Bognor Regis, support Duff in his difficult job as Churchill’s Minister for Information and through his career as a diplomat in Algiers, Singapore and Paris.  Diana’s circle of friends and acquaintances was legion – as indicated by the extract at the top of this post – and the list names and nicknames at the back of the book is an invaluable reference.

Not a diarist, Diana’s life is chonicled through her letters – she was a prolific correspondent, and her son describes how she would write “sitting bolt upright in bed, cross-legged, a pad of paper on her right knee, a pencil in her hand – always pencil so as to not get ink on the sheets.”  So much of Diana’s personality shines through these letters; her insight, her humour and the way that she would willingly turn her hand to anything her life threw at her, from getting to grips with cow husbandry to a stint as a gracious hostess when Duff was appointed British ambassador to France immediately after World War Two.

I do hope that John Julius Norwich will put together a further volume of his mother’s letters.  She is both of this world and of another, past, world and her correspondence is fascinating.