Shelf notes: In The Woods by Tana French 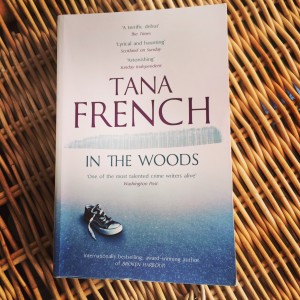 It’s a well-worn trope that crime writing isn’t taken as seriously as other genres – even a writer such as John Banville dismisses the crime novels that he writes under the pseudonym of Benjamin Black. However, as Allan Massie writes in this piece about Ian Rankin’s recent appointment as a Fellow of the Royal Society of Edinburgh, the crime writer has the ability to explore any area of society for crime crosses boundaries of class and geography. There is a commonality to emotions – we all feel love and loathing, and even if we don’t all let those sweep us into dark and dangerous places, it’s often easy to imagine how it could happen.

There are some fantastic crime writers around who given the lie to the intellectual snobbery of some critics – Rankin for one, but also Attica Locke, Laura Lippman and George Pelecanos to name just a few. Their books are definitely not formulaic or hackeneyed. I’d also add to that list Irish writer Tana French whose backlist I’m currently racing through. Broken Harbour was my crime novel of the year in 2012 and her newest, The Secret Place is just as good and proving popular with our Glenogle and Bell crime fiction readers.

I’ve only just got around to reading her first, In The Woods, published in 2007. The narrator, Rob Ryan, a Dublin Murder Squad detective, is investigating a killing with close ties to his own childhood, when he and two friends went to play in the woods and two of them disappeared for good. Back in the same village, with too-close-for-comfort echoes of that childhood trauma, the memories that he’s suppressed for 20 years, and which only one of his colleague knows about, are niggling at the edges of his consciousness.

Told in the first person, Rob tells us at the beginning “what I am telling you, before you begin my story, is this – two things: I crave the truth. And I lie.” And that’s the first lie. Although ostensibly a police procedural, the heart of this book lies in the unravelling of Rob’s life as he starts to remember what happened that day in the woods and the self-destructive path that he sets out on.

It’s not a feel-good book; it’s heartbreaking. Nor is it a murder mystery that’s neatly solved and the loose ends tied up in a bow at the end. Rather, elements are unresolved and questions still unanswered; much like real life. What will happen to the murderer and does Rob really not remember what happened in the woods? It is a haunting book and Rob and the secrets he carries with him will linger for a while afterwards. I can’t recommend it highly enough – 5 stars. And I hardly ever give a book 5 stars.