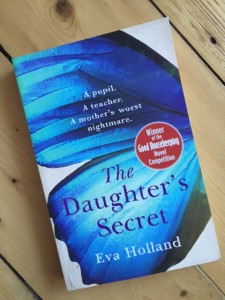 When she was 15, Stephanie ran away with her 24 year old teacher, Nathan Temperley. Six years later, her mother discovers that Temperley is about to be released from prison, far sooner than expected.

The family have never talked about what happened, never dealt with the emotional fallout and neither parent has considered that their daughter may have become involved with Temperley because they were so self-involved (her father) and neurotic (her mother).

The story is told over several days, counting down to Temperley’s release, with fashbacks to the abduction, building the tension as the reader wonders what’s going to happen upon Temperley’s release. What happens is both inevitable and unexpected and the end of the book is left open and ambigious, asking the question of any mother reading: ‘What would you do?’

This is Eva Holland’s first book and was the winner of Good Housekeeping’s 2014 novel competition. I was intrigued by the central story – a girl I knew at college had a relationship with a teacher while she was still at school, his marriage broke up and she carried on seeing him for quite a long time. Even then, nearly thirty years ago, I didn’t see it as a forbidden romance but rather as someone who had abused their power. Today, that teacher would be in court and probably in prison, his career shattered. It’s interesting to see how children are protected better now and that predators are seen for what they are.

I really enjoyed the book and I’m sure that some of our Glenogle & Bell customers will too. I’m also looking forward to seeing what she writes next as this type of psychological family drama has a lot of potential.

This entry was posted in Shelf Notes and tagged Eva Holland, fiction, review. Bookmark the permalink.