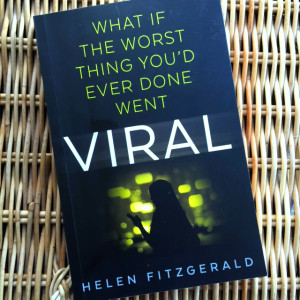 The internet, and social media in particular, means that drunken mistakes, a misguided off-the-cuff remark or even an unfortunate choice of dress can result in viral videos, out-raged mobs with torches and pitchforks and all manner of other mass outrage. As parents constantly remind their children, the internet is for ever and the days when your teenage errors of judgement rarely move beyond your extended circle of friends and don’t follow you to university or to a new job have gone for good. It’s wrong but it’s the world we live in.

Non-fiction titles such as So You’ve Been Publicly Shamed by Jon Ronson have looked at the experiences of those whose transgressions have become horribly, permanently public, but, as far as I’m aware, Viral by Helen Fitzgerald (The Cry, Dead Lovely) is the first novel to explore the experience and repercussions of a drunken night out, preserved for ever on You Tube and its ilk.

Leah Oliphant-Brotheridge and her adopted sister Su go on holiday to Magaluf to celebrate their A levels but only Leah returns home as planned. Su – successful and swotty – is on the run, humiliated and afraid. Someone filmed her drunkenly performing a sex act in a nightclub and it’s gone viral. Everyone has seen it.  The girls’ mother, Ruth is a court judge and is furious. She’s worried about her daughter, desperate to find her and bring her home and she wants retribution against the men who exploited Su and should have known better. She also wants to know what role Leah – usually far more of a wild child – has played in all of this.

This is a fast-paced novel, mirroring the speed at which these stories spread, and it’s a quick read with memorable characters – we feel sorry for Su, growing up we all knew a ‘frenemy’ like Leah who would laugh if this happened to someone else.

The publishers have suggested this as a book for fans of The Good Wife and The Girl on the Train which seems about right although I think it would be worth giving to older (16+) teenagers as a warning of what can happen when they let their guard down. And it will send chills down the spine of parents.

Out now in hardback and in paperback in August.

This entry was posted in Shelf Notes. Bookmark the permalink.