So. Writing. Where am I up to? 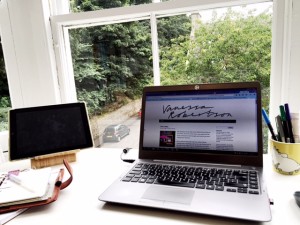 Here’s the thing. Writing is important to me. Really, really important. I love that feeling when the words are whizzing out of my head and onto the screen and the story takes on a life of its own. It’s amazing.

Here’s the other thing. Until I sell the novel and am actually earning money from my writing, it has to take a backseat to other jobs, the ones that put food on the table. If there’s pressure to be working on those tasks then I feel guilty about writing and so the words don’t come.

The last few months, when we’ve had a house to refurbish, three lots of new tenants to find (the paperwork is unbelievable), we’ve moved to a house that needs lots of work and where I don’t have an office, and it’s been the school holidays which means that the peace and solitude I need haven’t been possible, have not been a good time for writing. I’ve tried and tried and trust me, Malcolm and The Son have been nothing but supportive, but the words haven’t wanted to come. What I’ve written has been lumpen and dull, all the energy sapped from them by an every growing list of other stuff I need to do.

However, it’s improving. Everything is settling down in terms of food-on-the-table work, The Son is back at school, and even the new puppy is less exhausting and distracting. I had lunch a week ago with an agent friend who gave me a talking to and made me feel excited about writing again, and I’ve actually produced some quite decent work in the last week or so. Maybe I need to forget trying to actually write during July and August and concentrate instead on gathering ideas and inspiration so that when I sit down on the back-to-school morning in September, the words are just waiting to be let loose?

This entry was posted in My Writing and tagged balance, home, writing. Bookmark the permalink.