Sunshine between the showers 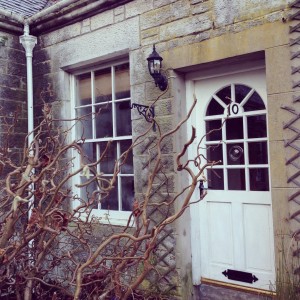 Our current project in rural Fife

Our current renovation project is a cottage in a converted stableyard in Fife (the picture on the left is deceptive – because of the layout of the courtyard it has only a little frontage but goes back into the corner and is really quite spacious) and yesterday I went over with The Husband, to see how it’s coming on. I also took my laptop and lit the wood burning stove so that I could work there for a while while The Husband carried on with whatever it is he’s doing to the kitchen electrics.  It was quite cosy despite the chaos. 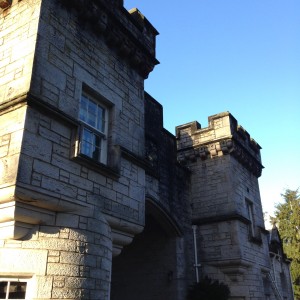 Entrance to the courtyard – everyone’s home should have battlements. Fact.

It was also one of those gloriously crisp, sunny January days and after lunch I went for a wander around the grounds. The estate belonged to the Smith-Sligo family and in the early 1980s, it was divided up by a local builder with the mansion house being converted into half a dozen apartments with the stableyard, gardeners cottages etc now comprising 12 cottages.  We all share 10 acres or so of grounds which is lovely – we all pay £40 per month to cover the cost of maintenance and a gardener. Beyond the grounds are woods, owned and thus protected by the Woodland Trust. It is truly idyllic. Although the house and courtyard and our grounds are private , the woodlands surrounding them are managed by Scottish Wood and can be walked in by anyone.

Most of these photos are of the main house and grounds as the sun had gone off the courtyard – the sun is so low at this time of year – but I’ll take some more soon. 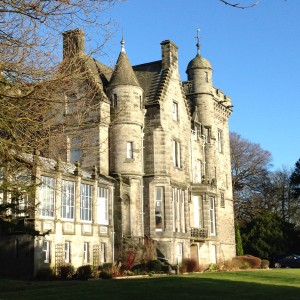 Inzievar House. Turrets and battlements and an orangery – I covet one of the apartments in the mansion house.

As you can see, the baronial mansion house is quite something with its turrets and towers. The Smith-Sligos were an industrial family who owned various coal mines, iron works and so on. I have a feeling – not as yet backed up by any actual research but it’s something I’m going to look into when I have time – that Archibald Smith was new money, hyphenated the Sligo part onto his name and hired the emminent and very fashionable Edinburgh architect David Bryce in order to establish himself in a society that would have been quite snobbish towards the newly-minted. 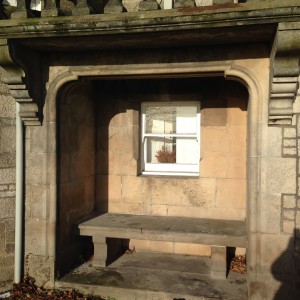 Recess and stone bench – if it wasn’t actually underneath one of my neighbour’s windows, I’d love to curl up there with a book.

I love the details of this style of architecture. Look at this little bench, set into a recess and looking out over the lawn and the fields towards the Firth of Forth. Isn’t it sweet? The buildings manage to be both impressive but there’s also an intimacy in the details. Can’t you just imagine a peaceful half hour here with a book, or imagine Victorian ladies sitting there to watch croquet or to shelter from a sudden shower? 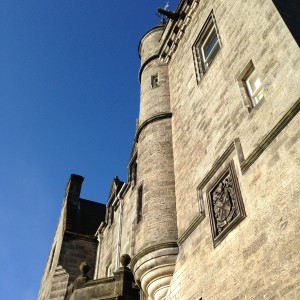 And here’s the Smith-Sligo crest on a wall plaque. There are several of these – Mr Smith-Sligo was very keen to make sure everyone knew that he’d created this estate.  I really must do a little research into him – in my head he’s a bluff man who’s proud of his success and wants to make sure everyone knows it.  He also – in my head – speaks with a Yorkshire accent in the manner of a Victorian ‘where there’s muck, there’s brass’ industrialist from Leeds but I’m aware that that’s my own imaginings. I have a feeling that he was actually from Kirkcaldy, just along the Forth. 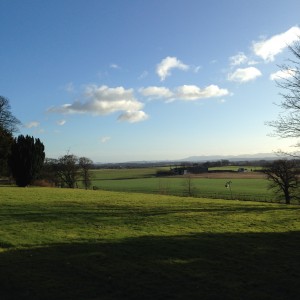 Looking south towards the Forth and Edinburgh

And this is the view looking south toward the Firth of Forth. So peaceful. And look at that sky – so blue with little scudding clouds. What you can’t see is that it was so cold my fingers were almost too numb to work the camera. 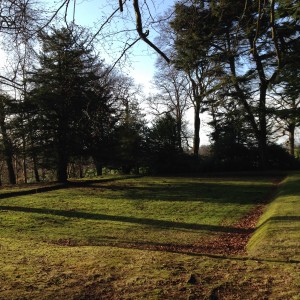 We’re not sure what this is. I have a feeling that it may have been a curling pond at some point.  It definitely wasn’t a tennis court because that’s elsewhere.  It was certainly something though as it’s obviously been deliberately constructed for some purpose. Hopefully when I have time to spend in the National Library or wherever I’ll be able to find out.  If it was a curling pond how much fun would it be to have an Inzievar Bonspiel next winter? I know a lot of people who would get very excited about that!

So that’s where our current project is. I’ll take some pictures of the interior of our cottage next time I’m over there.

We bought it as a straightforward refurb-and-sell but it’s such a great location that we’re tempted to keep it, either as a rental or a holiday let. What do you think? Would you want to go on holiday there?

One Response to Sunshine between the showers