What we did on our holidays….. Yosemite 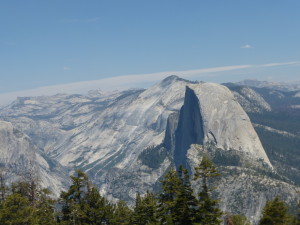 Our long-planned homeswapping trip this summer was to the Bay Area of California, where we exchanged homes with M and R who were keen to experience the Edinburgh Festival and Fringe. They had a brilliant time and we loved our almost-four weeks in the USA and as we weren’t paying for our accomodation our budget stretched a lot further, enabling us to add in a couple of side-trips including three days at Yosemite National Park.

It’s a long drive from San Francisco to Yosemite, beginning with terrifying 12 lane freeways, the slightly smaller interstates and eventually much smaller and less nerve-wracking highways. As we nearer the park, driving through the mountains of the Sierra Nevada we saw eagles circling over precipitous slopes and heavily wooded valleys. The landscape is impressive and inhospitable.

Stark, rocky hillsides, peppered with pine trees are softened by a heat haze as they stretch into the distance. It’s hard to imagine that heavy snow comes each winter when in August, in 100 degree heat, the drought means that that the melt water that filled the waterfalls and creeks a few months ago has long gone and cataracts such as Bridalveil Falls are nothing but a trickle.

It’s a barely inhabited environment, where roads have been carved into the rock; crags rising to one side and steep, bottomless, unfenced, drops on the other. There are few houses and farms but these get a little more numerous as you near the Yosemite National Park as motels and guest houses spring up to cater to the visitors who are unable to obtain reservations at one of the handful of establishments within the park – we tried three or four months before our visit and couldn’t find so much as a campsite to put us up.

Entering the park by the south entrance, after the tunnel, this is the view; the whole valley laid out before you, looking for all the world so perfect, so unspoilt, that it almost looks like a green screen background. 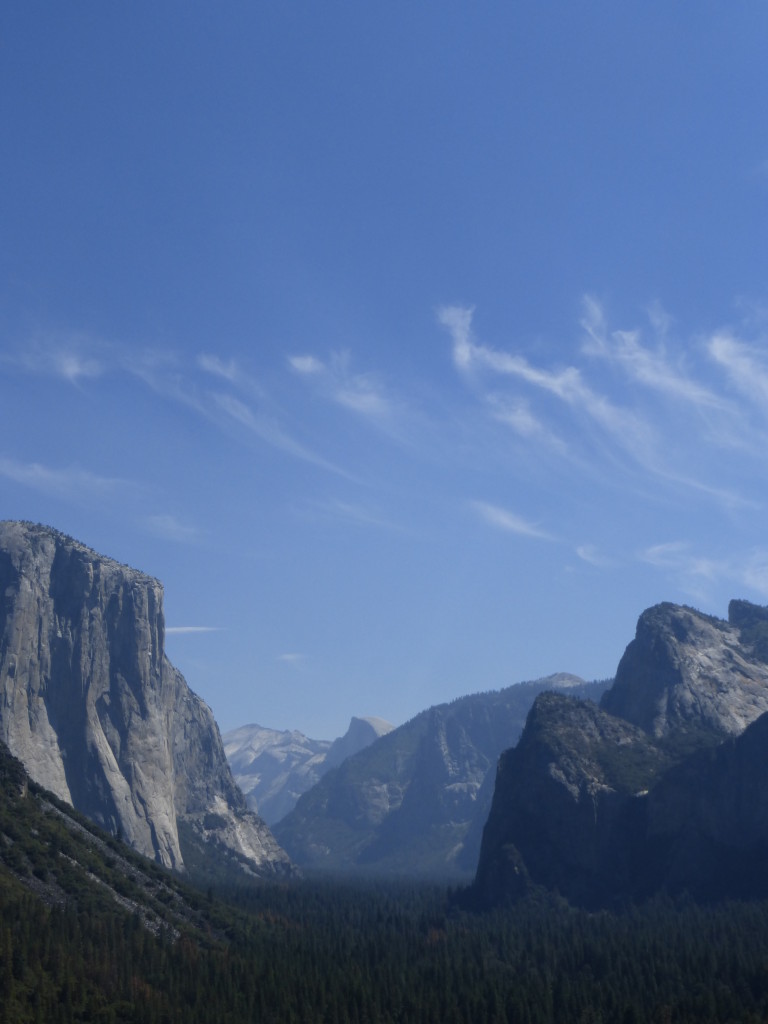 Yosemite Valley from Tunnel View. Left to right, El Capitan, Clouds Rest, Half Dome, Sentinel Dome, Cathedral Rocks and where Bridalveil Fall would be if it hadn’t dried to a trickle when I took this photograph.

Breathtaking even as a photograph…

We were only there for a couple of days which was enough to tour all the main areas. Those planning to do any serious hiking would need to stay longer but we still managed to see the giant sequoia trees and climb to the top of Sentinel Dome – the joy of that is that Glacier Creek Road takes you to within a few hundred feet of the summit. The view from the top is quite stunning, at a height of over 8,000 feet – almost twice the height of Scotland’s Ben Nevis. 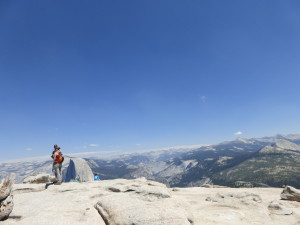 On top of Sentinel Dome

Awe-inspiring is an over-used phrase, but Yosemite really is, from the vast granite bulk of El Capitan, so sheer that you can’t imagine how people climb it, to the unmistakeable shape of Half Dome and the far-reaching views in every direction. We want to return sometime in the spring so that we can see it with snow on the peaks and raging waterfalls.

There’s a Visitors’ Centre in the valley and it was the most disappointing element – crowded and packed with cars and coaches although I imagine that’s unavoidable. Away from the valley floor it’s much quieter and even in peak season we were able to find some solitude, whether picnicking by a lake or just stopping in one of the turn-outs and gazing at the view. The Ansel Adams Gallery by the Visitors’ Centre promises far more than it delivers. As a gift shop at a tourist attraction it’s excellent; as a gallery of Ansel Adams life and work in Yosemite it’s rather disappointing being mostly a place where you can buy posters and postcards by the great man, as well as other arty-crafty knick-knacks.

We spent two nights staying at the Yosemite Bug Rustic Mountain Resort, an inexpensive place with accommodation ranging from backpackers’ dorms to the wooden cabin we booked, with beds for four and an en-suite bathroom. It was spotlessly clean and the staff were mostly very friendly. The food in the cafe is good and if you’ve had a long day hiking this sort of filling, stock-to-your-ribs nourishment is ideal. Being able to eat dinner while watching eagles circling on thermals rising up from the valley below was amazing. 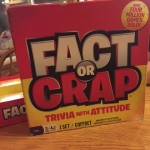 Fact or Crap – boardgame name of the year so far

The cafe is decorated in a kind of retro outdoorsy style, with old wicker snow shoes and the like everywhere. It’s also got a couple of comfy leather sofas and a big fireplace and it would be lovely in the winter. There’s a massive selection of board games (though no Scrabble…) and we discovered the never-before-seen Fact Or Crap. When we manage to get back there one spring, we’ll definitely stay at the Bug again although the wicker chairs on the veranda of the Wawona Hotel did look tempting on a hot afternoon…

No words of mine can do justice to Yosemite though, so I’ll leave you with a few more images from our trip. 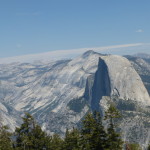 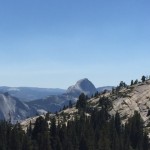 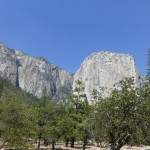 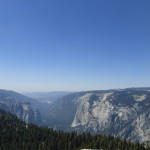 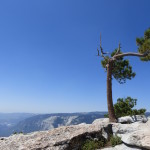 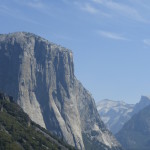 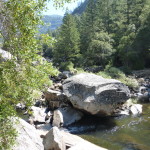 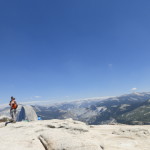 This entry was posted in Travel and tagged Ansel Adams, California 2015, USA, Yosemite. Bookmark the permalink.