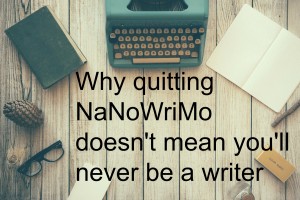 It’s November and everyone who writes or wants to write knows that November is NaNoWriMo (National Novel Writing Month) time.

As recent data showed that being an author is the preferred career choice for 60% of the population. I imagine that this year will see even more people taking part. Presumably they’ve missed the info that half of writers in the UK earn less than £11k per year. Not everyone makes James Patterson money.

But I digress, in brief, the idea behind NaNoWriMo is that you dig in and tap away for the whole month and by the time December comes around you’ve written a 50,000 word novel. Or rather, you’ve written 50k words which you may be able to expand and wrangle into a novel. Note, ‘expand’ – just because Slaughterhouse-Five and The Great Gatsby come in at just under that, most publishers (and readers) expect novels to be longer. Unless of course you write like Vonnegut or Fitzgerald in which case you’d be reading your TLS reviews and not my blog.

NaNoWriMo works really well for some people, providing focus and the metaphorical boot up the backside that will help them to keep going when they want to walk away. So, if you’re hitting that magic average of 1667 words a day and the plot is flowing and you’re feeling great then go you. Crack on, I’m cheering you all the way. Let’s talk at the beginning of December about how what you’re going to do with your NaNoNovel.

But what if you’re one of the people whose novel fell at the first fence? Or maybe the first weekend. On the one hand if you look at the numbers, then you can take comfort from the fact that you’re part of a huge majority. In 2014 there were 325,142 participants registered with NaNoWriMo and 58,97 people completed their 50k words. That’s less than 20% so don’t take it to heart if you don’t make the finishing line. And then there are all the people taking part who haven’t registered. Some see it as a mere setback but others that I’ve spoken to are really cast down by it, sure that this ‘failure’ means that they should abandon their literary dreams.

If you’re one of those people, it may be that you didn’t complete the challenge because you really can’t write for toffee and should give up now. You no doubt have other talents and aspirations so make the most of those. But there are lots of reasons why flunking NaNoWriMo doesn’t mean that you should walk away from your literary aspirations.

So, if NaNoWriMo is going well for you then I’m pleased for you and let’s meet up in a few weeks and look at the next steps. But if you’re at the stage when you’re struggling or it’s already gone to hell in a handbasket then take comfort that all it means is that this isn’t your way of writing. Keep trying and find the way that works for you.

This entry was posted in Advice and tagged for what it's worth, my two penn'orth, NaNoWriMo, writing. Bookmark the permalink.