Writing in the dunes, imagining the scene as the German Navy surrendered… 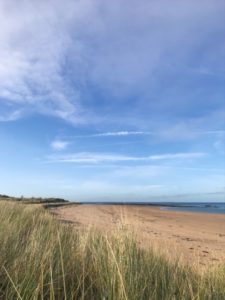 cottish National Portrait Gallery, back when I was writing an early draft of Death Will Find Me and still getting to know my characters, I saw an image from the day the German fleet surrendered to the British Navy at the end of World War One. It was something I didn’t know about – that the powerful Imperial German Navy, so feared during the war, had been brought into the Firth of Forth before being escorted to Scapa Flow in Orkney where the ships were scuttled a few months later. Seven are still there today (the majority were salvaged for scrap in the 1920s) and are popular with scuba divers. You can read more about the surrender here.

And I immediately knew that Tessa, my heroine (and she is a heroine), would been there. As a casualty of the war, injured at the Front in 1917, and particularly as a woman who had served, often in a covert capacity, she would have had few people she could talk to about her experiences and when the Armistice finally came, it would have felt rather remote from her. I knew that she would have been pleased and relieved, obviously, but I didn’t think she would have felt comfortable celebrating.

However, Tessa would have needed to see some evidence of the German capitulation in order to be sure that it was over and that she could start to rebuild her life. On the day of the surrender, 21st November, 1918, she would have driven out to the East Lothian coast to watch the British fleet sail out at dawn. And I could see her sitting in the dunes with her memories and her ghosts, processing what was happening. Maybe other people would be there on the beach, people who’d lost loved ones, servicemen who also felt a need to witness this.

I’ve always known that this would be a short story and that it would be the perfect way to introduce readers to Tessa and how her experiences made her the woman we meet at the beginning of Death Will Find Me. Things are progressing publication-wise at last, and I’ve now started work on that short story. In a few weeks, I’ll be using it to launch my mailing list so that readers can meet Tessa and realise why I was so intrigued when she arrived in my life.

Playing around with this story has been a really satisfying way to reintroduce myself to Tessa. I haven’t written anything about her for the best part of a year. It felt like tempting fate to write the second book in the series when the first was still to find a home and when I did show my then-agent an early draft of the opening for book 2 he was pretty dismissive of it which didn’t do my confidence any good as you can imagine. Instead, I concentrated on the contemporary art thriller that’s now complete and which I’ve put to one side until I decide what to do with it.

Now that the way ahead looks clearer, I need to crack on with the Tessa Kilpatrick series and so I took a trip to the coast this morning, to sit on that beach in the dunes. I breathed in the ozone and I imagined the grey hulls of the ships looming out of the haar like ghosts; the other people who would have felt that same need to bear witness to this moment; the way that Tessa would have felt witnessing this. I felt the familiar tingle that comes from storytelling and I drove home feeling more positive about my writing than I have for a while.

Tessa and I are going to be spending a lot more time together in the future and I’m delighted about that. She’s great company and I’m looking forward to seeing what she gets up to.

This entry was posted in My Writing, Writing and tagged Death Will Find Me, out and about, Scotland, short story, World War One, writing, WW1. Bookmark the permalink.