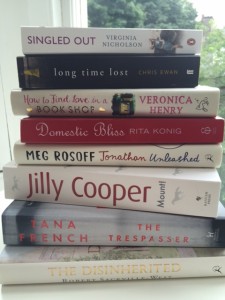 Now that the move is over, I’m looking forward to catching up on some reading, both proofs that will be out this autumn and recent acquisitions.

Top of the pile is Mount! by Jilly Cooper. I am so pleased to have a copy of this proof! I have adored Jilly’s books since I first discovered them in my early teens. Rivals is my favourite and a brief discussion on Twitter showed broad agreement, including from Ian Rankin, who has to be one of the least likely Jilly Cooper fans around. Mount! (I loathe that exclamation mark) brings back Rupert Campbell-Black, now a hugely successful racehorse trainer and breeder intent on his stallion Love Rat winning the accolade of Leading Sire. The Jilly trademarks of scandalous scheming and romantic tangles are all there and I’m loving it so far. It came with lots of embargo notices so I don’t think I can say much more but I will review it properly later.

The other proof that arrived was The Trespasser by Tana French, one of the best crime writers around at the moment. Broken Harbour and The Secret Place are both excellent and I don’t expect this new Dublin-set police procedural to be any different. Again, a proper review coming when I’ve read it and I’d love to interview her here so I’ll be in touch with her publicist to see if we can set that up.

The Disinherited by Robert Sackville-West has been on the bookshelves for a while but I put it to one side when I packed up all the other books as I want to finally read it this summer. The story of a failed attempt to claim a vast inheritance, the cover quote from Lucy Worsley reads “stranger than fiction, but twice as fascinating, and leaving behind it a sense of bittersweet sympathy”. Knole, the subject of that claim, and the Sackville-West family are intriguing and I’m looking forward to getting stuck into this, especially as non-fiction is my preference while I’m writing.

Among the other non-fiction on my pile is Singled Out by Virginia Nicolson and this is part please, part research. Looking at the lives of the so-called ‘Surplus Women’, deprived of the traditional future of marriage and children by the terrible losses of World War and who had to forge new futures, often taking the opportunity to challenge conventions, becoming political campaigners and how they changed society by proving that there was more to women’s lives than marriage. The heroine of my novel, although widowed in 1920 via a bullet to her husband’s temple rather than during the war, faces many of these same challenges so this will be both research but also a good read – Nicolson’s Among the Bohemians was a great piece of writing.

I’m looking forward to How To Find Love In A Bookshop by Veronica Henry. I picked it up on a whim as it’s set in a bookshop although when I got home I was a little equivocal about the chick-lit-ish cover but Elaine over at Random Jottings said in her review at Shiny New Books that she loved it. We tend to have similar opinions about a lot of books so I’m sure I’ll enjoy it too.

I’ve enjoyed Chris Ewan‘s crime novels since way back when his debut, The Good Thief’s Guide to Amsterdam, was published by Susan Hill at Long Barn Books. I’m samefully late in getting round to this proof of his newest, Long Time Lost, which published in May…

Hygge, the Danish concept of snuggling in for the winter, is becoming better known and Denmark has also given us the inestimable Sandi Toksvig and Lego. Therefore like more right-thinking people when Helen Russell had the chance to spend a year in Denmark finding out more about this country that is supposedly the happiest place on earth, she leapt at it. I picked this up on the spur of the moment in The Main Street Trading Company and it will be the perfect read as another Scottish winter looms on the horizon.

Best known for her YA fiction such as How I Live Now, Jonathan Unleashed is Meg Rosoff‘s first adult novel and it’s shocking that I haven’t yet jumped into this well-reviewed and best-selling book. Will rectify that forthwith.

Finally, another non-fiction, and not a new one at that. Domestic Bliss (subtitled How To Live) by interior decorator Rita Konig has been around for a while and I tend to re-read it whenever we move house when we’re at that depressing stage when everything looks a bit shabby and I’m cross because none of the kitchen appliances work probably and all the plug sockets are in stupid places. Somehow her advice to jazz up one’s broom cupboard, the importance of 5 amp plug sockets where you want to put lamps (seriously, you should do this – it means that when you flick a light switch the lamps come on and you don’t need to faff around turning them all on or blinding yourself with the glare of an overhead bulb. Instant cosiness) and the joy of a good scented candle, are soothing and reassure me that in time this new house too will be utterly delightful. Also, excellent tips on dealing with The Moth.

This entry was posted in Books. Bookmark the permalink.