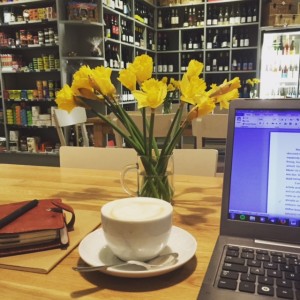 So far, 2017 has been a curate’s egg of a year – good in parts. I spent most of January recuperating from the vile chest infection that laid me low for much of November and December. I coughed so badly that my neighbour, a doctor, turned up on my doorstep with a stethoscope in her hand to see how I was as she’d heard me hacking away through the wall…

I also heard back from the agents to whom I’d sent Death Will Find Me just before Christmas. They’d both asked to see the full version and one of them in particular I had high hopes of. As is the way of these things, that agent came back and said that she was passing on it. She gave me some useful advice and although I cross and upset for a bit I started to dig in and pay attention. Then – just as I’d given up all hope – the second agent got back to me and said that he liked the book but felt it needed more work. He suggested giving me some editorial notes and seeing how they helped and then: “all being well, we can move forward in a positive way”. Promising no?

So I’ve put on hold the plans I did have and I’m revising the manuscript – I’ve set myself a deadline of the end of March to send it back to him. It’s hard work because what looks like a small tweak in one place requires lots of tiny little tweaks in other places to make it work. Once I’ve sent this back to him I’m going to treat myself to a couple of days of writing – not editing, just writing – because I’m missing that lots at the moment. No idea what that will be although I do have an idea for a contemporary thriller that I’d like to explore.

So that’s all been rather exhausting, mentally and emotionally. In other news, we’re cracking on with the house and the woodburning stove is now installed in the sitting room – it’s a cosy, glowing, toasty thing of joy. Our garden here is a disaster zone still but the walled garden in Fife is a delight and I came away from it last week with lots of ideas for this summer. I’m trying to plan this year properly so that it doesn’t slip past with what feels like little to show for it and my goals for the first quarter are coming together although March is going to be busy if I’m to keep up.

But right now, apart from the pain of editing and the lingering lack of energy, I’m feeling pretty good about things. I hope you are too.

This entry was posted in My Writing, Thoughts. Bookmark the permalink.

One Response to Life Lately….