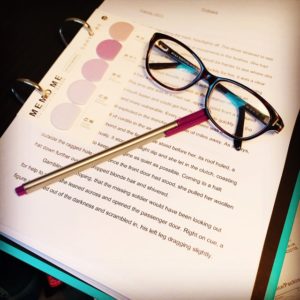 It is striking that I’ve written only three blog posts so far this year – a vague one about the progress (or lack of it) that Death Will Find Me had made in terms of finding a publisher, a piece about the importance of libraries in my life and a post a couple of weeks ago about a short story I’m working on which I’ll using to launch my mailing list in the next few weeks. I’ve been waiting on having actual concrete news to share, something actually happening.

In some ways the last year or so feels like so much wasted time, writing-wise. Yes, I was signed by an agent but he turned out to be unable to sell the book despite lots of enthusiasm from editors who loved it but felt that it was a tricky sub-genre to sell. I wrote a different type of book but my agent felt it was too niche and that we should part company. A handful of other publishers have seen Death Will Find Me since then and the response has been the same. It’s come close but when it came to actually producing a contract, publishers have backed off.

To quote one: “You’re a fantastic writer – your storytelling is immediate, evocative and atmospheric, as well as gripping and intriguing. I felt like I was right there in 1920s Edinburgh. I was also very compelled by the mystery at the heart of your novel.” And then, as I’ve heard so many times, there’s the next bit: “However, my instinct is that this is a very tough area of the market, which is a real shame. It’s for this reason, sadly, I’m going to have to pass in this instance. But it’s with regret, as I think you’re a talent with lots of potential.”

That editor also expressed enthusiasm about working with me if I wrote something different, by which she means more commercial. In some ways, it’s depressing that publishers are so scared of taking a risk. I mean, Death Will Find Me is historical crime fiction; it’s not as though I’m writing serious, highly-stylised literary fiction.

But it is reassuring in some ways. As friends have pointed out, I’m a good writer and I’ve written a good book. I’ve been told that by people who know what they’re talking about and who have no obligation to be nice! I saw the emails they sent to ex-agent and they were very positive about my writing and the book itself. I asked him whether it was the convention that they said kind things and he assured me that was not the case and that usually he had to edit comments for his authors so that they weren’t upset or offended.

So, where I am now is that I’m a good writer with a good book that is the first in a series which people seem really excited about. But from a business point of view, major publishers don’t see it selling in big enough quantities to be financially viable. After all, riverside offices and parties at the National Gallery have to be paid for by the sales of their authors. And when I look at smaller publishers, many seem to be run by people who have less experience of the book trade than me and I wonder what value they’re going to add to the deal in exchange for their cut of the profits.

Next week, I’m going to outline what my plan is going forward. I’m really excited but I’m also reading this passage by Teddy Roosevelt to reassure me when my courage wavers:

“It is not the critic who counts; not the man who points out how the strong man stumbles, or where the doer of deeds could have done them better.

The credit belongs to the man who is actually in the arena, whose face is marred by dust and sweat and blood; who strives valiantly; who errs, who comes short again and again, because there is no effort without error and shortcoming; but who does actually strive to do the deeds; who knows great enthusiasms, the great devotions; who spends himself in a worthy cause; who at the best knows in the end the triumph of high achievement, and who at the worst, if he fails, at least fails while daring greatly, so that his place shall never be with those cold and timid souls who neither know victory nor defeat.”

The heroine of Death Will Find Me is not a cold and timid soul, and neither am I.

This entry was posted in My Writing, Writing and tagged agents, daring greatly, Death Will Find Me, editors, plans, publishers. Bookmark the permalink.